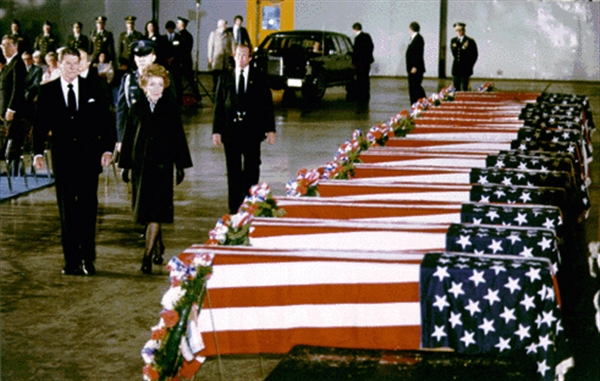 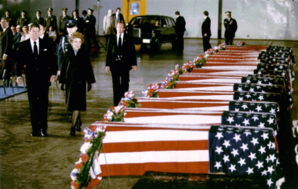 The President and Nancy Reagan mourn the victims of the April 18, 1983 bombing of the US Embassy in Beirut. Photo Source: Defense Department.

The Pentagon issued a press release today on the anniversary of the U.S. Marine compound bombing in 1983 that killed over 200 U.S. Marines in Beirut Lebanon. The release  contained remarks by current Secretary of Defense Chuck Hagel.

Suicide bombers detonated each of the truck bombs.

In the attack the death toll was devastating – 241 American servicemen: 220 U.S. Marines, 18 sailors and three soldiers, making this attack the deadliest single-day death toll for the United States Marine Corps since the Battle of Iwo Jima.

Another 128 Americans were wounded in the blast.

Thirteen later died of their injuries, and they were subsequently numbered among the total number who died.

Then President Ronald Reagan called the attack a “despicable act” and vowed revenge against all those responsible. In a moving speech Reagan recalled the events of that day  (see Youtube video President Reagan’s Beirut Bombing speech : http://www.youtube.com/watch?v=yFA5f0n-Nak).

The Secretary’s comments are as follows:

“Today we remember the 241 U.S. service members who were killed 30 years ago in the attacks by Hezbollah against the U.S. Marine compound in Beirut. It was a deadly and tragic day for the Marines, the Department of Defense, and the United States of America — one that will never be forgotten.”

“The United States will always honor the sacrifice of those fallen service members, whose mission was to bring peace and security to Lebanon. As we reflect on the legacy of that terrible day, we strengthen our resolve to support the people of Lebanon, and we give thanks for the many sacrifices our military, development and diplomatic personnel are making across the globe to protect Americans and promote our values and interests”, said Secretary Hagel (source: DOD press Release http://www.defense.gov/releases/release.aspx?releaseid=16331).