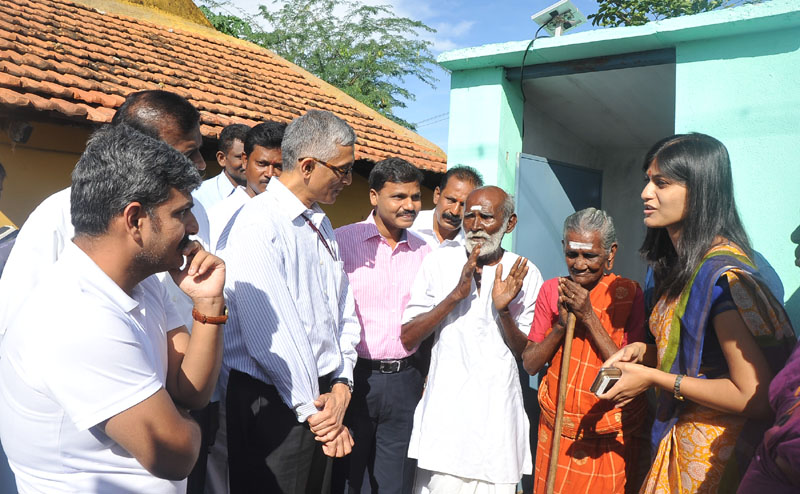 The Secretary, Ministry of Drinking Water and Sanitation, Mr. Parameswaran Iyer felicitated the 90-year old couple who made their village ODF, at village Achhampatti, an ODF village of Madurai, during his visit to Tamil Nadu to review SBM progress on June 20, 2016.

Madurai (PIB-GR-TYP-BIN): The Secretary, Ministry of Drinking Water and Sanitation, Mr. Parameswaran Iyer, visited Madurai district to review Swachh Bharat Mission performance in the district during his State visit to Tamil Nadu. The Secretary, during the visit, observed that Madurai District Collector, Mr. Veera Raghava Rao, and Additional Collector, Ms. Rohini Bidari, are proactively leading the campaign in the district. The campaign in Madurai has been christened “K to K”, i.e. Kanmai Karai (Tank bund, the usual place of open defecation) to Kazhi Parai (a toilet).

The Secretary began his visit with the village Achhampatti, an ODF village of Madurai. Here, he met and felicitated the 90-year old couple who were the first to adopt a toilet in the village, and motivated others as well, leading their village to ODF status. The Village level federation of SHGs and trained motivators also played key role in this, along with private contribution in the form of solar panels over toilets to provide light.

Following the example of Achhampatti, adjoining villages were also motivated. Through setups and tools such as Integrated Women Sanitary complexes, collective triggering, participatory rural appraisals, the district is now scaling up its successes through multiplying motivators, increasing technology options etc.

The Secretary also made a village visit to Chattrapatti to see a live example of Solid and Liquid Waste Management-MGNREGS convergence in action.

Back in Chennai, during the meeting with the State officials led by Principal Secretary Rural Development, Mr. Hansraj Verma, the Secretary appreciated the efforts of the State Government in prioritizing sanitation. After discussions, it was agreed that the State will prioritize sanitation further in the overall sanitation agenda, including achievement of complete open defecation free (ODF) villages. It was also agreed that the State will continue to focus on behavioural change and community engagement, while Government of India will extend full support to the State in its endeavors.