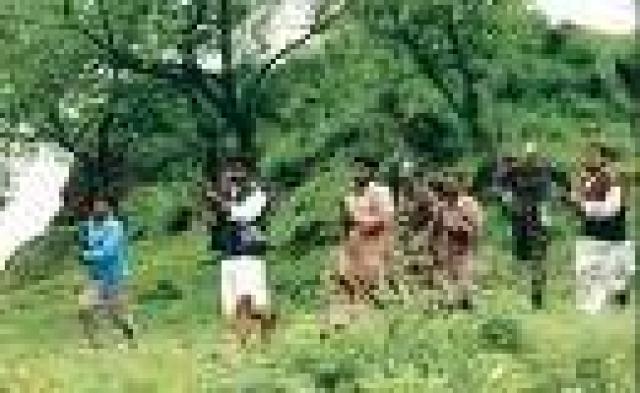 Jammu and Kashmir Police and Security forces gunned down three terrorists  of LeT outfit in an encounter which started in the wee hours at village Sarawan Keshwan in  Mountainous district of Kishtwar.
According to Police, that on specific information about movement of a group of three LeT terrorists, troops of 11 RR and Kishtwar Police launched a joint search operation at Sarawan village of Keshwan in Kishtwar.

During search the troops were fired upon by the terrorist from a nearby house, which triggered gunfight and resulted in killing of all the three terrorists who tried to escape from the house with the advantage of dense forest.  The bodies have been retrieved and their identification is being yet to be ascertained.

However, huge arms and ammunition which includes; one AK 56 Rifle with three Magazines, few Grenades and few Chinese Grenades were  recovered from the encounter site.

The killing of these terrorists is a great success to the Police forces and Security forces, as it will give a severe blow to the outfit in the area.

It is, pertinent to mention here, that three terrorists of same cadre including a PAK national terrorist were gunned by the Kishtwar Police and 11 RR in the same area on  March 14, last month.

Inspector General of Police Jammu, K.Rajendra Kumar has appreciated the work of searching team and said that they would continue such type of operations in future to frustrate the evil designs of anti national elements.

Filed under: Media & Tech, World
Share Tweet Pin G Plus Email
previous article: Job of a political worker is to fearlessly move around among local masses: JK CM
next article: Kashmiri Pandits blame separatists for exodus and destruction of temples in Kashmir