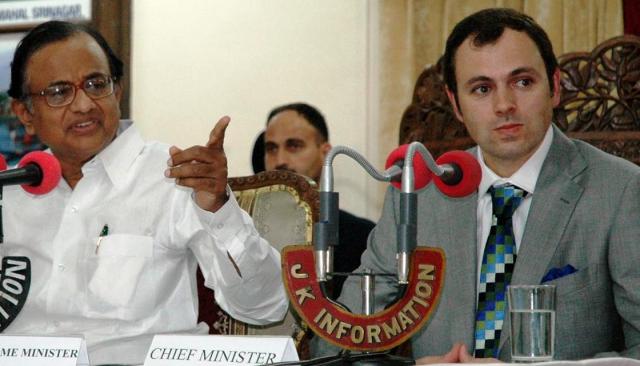 Jammu, March 18 – The Union Home Minister, P. Chidambaram on Wednesday evening stating that the security forces have gained upper hand in the Jammu and Kashmir State in curbing militancy,  Chidambaram asked them to remain on high alert in light of the coming Parliamentary elections and the turmoil in Pakistan. Home Minister has also said that the Army has ordered an investigation into the Bomai incident and assured that appropriate action will be taken once the report becomes available even as the Chief Minister Omar Abdullah said that there was no difference of opinion between the State Government and the Army.

The Home Minister P. Chidambaram and the Chief Minister Omar Abdulla said this while addressing a joint press conference immediately after the end of the Unified Headquarters meeting chaired by the Chief Minister, in Jammu today evening.

‘The situation in is giving us no comfort at all. We don’t know who is in control there. Prudence requires we remain on high alert, especially between April 13 and May 7 when the elections will be conducted in J&K,” the Home Minister advised, adding that all the candidates contesting elections as well as political leaders will be adequately protected.

The Home Minister also said that no additional troops are required to be deployed in the State during the ensuing Parliamentary elections in the State.

The Home Minister said there is an excellent rapport between the army, paramilitary forces, police and the civil administration which will work together to safeguard the interests of Jammu and Kashmir State. He said the situation in J&K has considerably improved in the last two years and the level of violence has also gone down, adding the security forces are better equipped and positioned to control violence, which has shown remarkable drop in the State.

Stating that the State Police would be at its full strength by 2010, P. Chidambaram said the issue of strengthening the State Police vis-à-vis weaponry, vehicles and housing would be addressed by the Central Government in consultation with the State Government as expeditiously as possible. “J&K Police has sanctioned strength of 79,275 including the five battalions raised recently. There are 6,000 vacancies which will be filled this calendar year,” he said, adding that steps would be initiated for identifying a secure communication network to connect 174 police stations in the State with State Police headquarters.

The Home Minister said the issue of revocation of Armed Forces Special Powers Act (AFSPA) was an old demand which has been flagged by the Chief Minister, Omar Abdullah. He said the issue will be discussed appropriately after the Lok Sabha elections are conducted.

On being asked to comment on the Bomai,Sopre incident, the Home Minister said the civil administration has completed its probe and the Army has ordered an investigation, adding that the report will be available shortly. “The Defence Minister told me this morning that the Army has ordered an investigation into the incident. Be sure, the Defence Minister, myself and the Chief Minister will look into both the reports and take appropriate action.”

In reply to a question, the Home Minister said that there is excellent relationship between the new Governor and the young and dynamic Chief Minister which will safeguard the interests of .

Speaking on the occasion, the Chief Minister said the Unified Headquarters meeting has a long experience of functional command and we have to utilize this channel to address the grievances of people and take care of security situation in the State. He said that the Unified Headquarters facilitates formal and informal linkages between the civil administration, army and paramilitary forces.

Abdullah also said that there was no difference of opinion between the State Government and the Army while discussing various issues pertaining to the security of the State.

The Chief Minister said the issues of manpower, technical improvement and other matters pertaining to the strengthening of Police were also discussed in the Unified Headquarters meeting. “We have identified short-term and medium-term measures to address all concerns”, Mr. Abdullah said.

The Chief Minister said that the smooth conduct of ensuing Lok Sabha polls will be a challenge and assured that these would be free, fair and transparent.