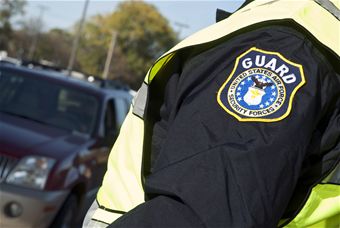 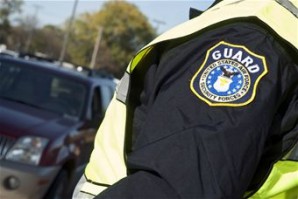 Outsourcing security is another problem: As you enter the gates of Offutt Air Force Base, Neb., you may notice a change in uniform as the 55th Security Forces Squadron is currently transitioning from contract gate guards to Department of the Air Force civilian police officers. (U.S. Air Force photo). Not really a good idea, when you think about it.

The U.S. military has a major need for physical security barrier, barrier walls, and systems that can protect our ground forces, military fighting assets such as planes and tanks, and critical infrastructure assets from hostile actions, breaches and security compromises. The military is also increasingly outsourcing its security to private companies – usually never a good idea…

The problem, of course is that the Pentagon doesn’t have enough money to accomplish a total revamp of its base security to insure safety in many cases. Well I take that back they have the money but they don’t choose to make it a priority. I guess were to busy fighting wars in other countries and rebuilding other nations infrastructure to be very concerned about our own military bases here at home…

I know one might think that a military base is among the most secure places in the country.

Unfortunately, though, the sprawling nature of many military bases extremely difficult to secure effectively.

For example following the Fort Hood incident, the Pentagon recommended tighter security for military bases and increased training for live shooter situations. However, with tight budgets and challenging security needs, many facilities today remain under-secured in that area. But the lack of physical barriers like fencing is also a huge problem.

Many military bases lack the following:

The military is trying in some places to increase security, but they are more and more outsourcing that responsibility to private companies which also carries certain risks associated with it.

Of course the military is vulnerable to a wide range of other  threats to its security  including those originating from outside their bases. Particularly where energy security and reliability is a concern.

I recently ran across an article detailing a mysterious power outage, that affected a US naval base at Coronado –  the cause of which remains unknown. Its important to remember that in such cases where the cause is not known it could very well be sabotage.

In this particular case the city, Coronado Cays, North Island Navy base and the Naval Amphibious Base on the Silver Strand were all affected by the outage.

In yet another case several areas of Naval Station Norfolk including base housing were affected by a power outage in 2012 – the cause of which is still under investigation.

In yet another case, last year Fort Gordon was adversely affected by a power disruption.

In that case the cause of the outage was  linked to an equipment issue problem of some kind.

In fact energy insecurity has gotten so bad at military bases around the country the US military is partnering with private sector energy providers to keep the lights on. Meaning they are paying for it in many cases, through government grants and loans.

Sadly the Pentagon remains absolutely clueless and doesn’t really have a handle on how serious this problem of lack of security really is at its military bases and installations across the United States.