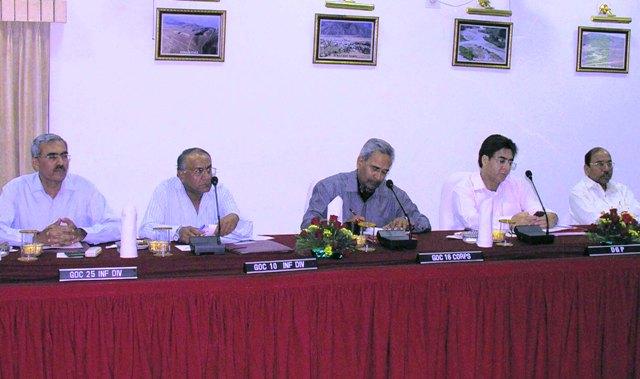 The meeting reviewed the security situation in region in light of the forthcoming Durbar move.  The Security Advisor complimented the security forces, intelligence agencies and civil administration for achieving high degree of synergy, enviable harmony and immense coordination amongst themselves towards a common and national cause and also handling of Internal Security situation in region.

He attributed the downward slide in terrorism to the jointmanship amongst the entire security set up in the state.  He stressed on the need to maintain continuous pressure and moral ascendancy over the terrorists, who have, by and large been marginalized.  He further emphasized that the coming months are crucial and the Security Forces need to be extra vigilant to neutralize the designs of anti national elements.  The meeting ended with a resolve on part of all present to maintain continuous pressure on the terrorists and ensure that complete peace is maintained in the region.

The Governor was given a detailed briefing by the GOC-in-C, Northern Command, Lt. Gen. B. S. Jaswal, on the overall security situation in the State, particularly in the backdrop of the recent attempts to enhance infiltration from across the LoC and the International Border.

The Governor, who had detailed discussions with the Army Commander and senior officers at the Command Hqrs, presented a trophy to the Lt. Gen. Jaswal as a memorabilia.