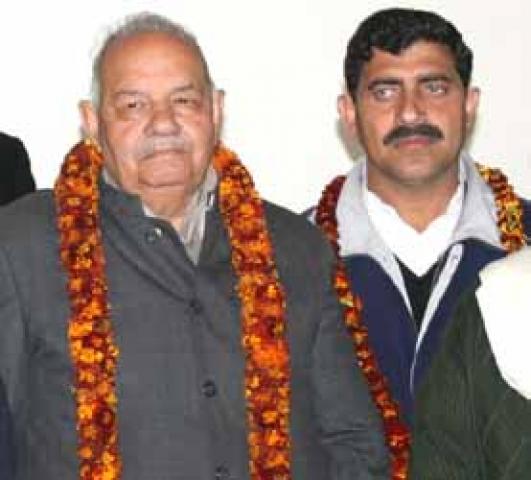 Jammu, November 16 (Vijay Kumar):- The former Indian Union Minister and leader of the J&K BJP unit  Legislators Party, Prof. Chaman Lal Gupta on Monday alleged that the seeds of communalism and division of India were sown by the British Imperialists who were opposed to the independence of this big country and even the instrument of accession of the princely state was indicated their design but it was a great leadership of late Sardar Patel, who managed the merger of all other 557 state but for Jammu and Kashmir, which was kept by the then Prime Minister Jawahar Lal Nehru to be tackled by him.

In a statement Prof. Gupta described the assertions of secessionists and semi-seccessionists that Maharaja Hari Singh wanted independent Kashmir and also limited ties with , as misleading and travesty of facts.

He asserted that Maharaja Hari Singh was a great patriot and he had fully supported the Praja Parishad agitation for full integration of with the rest of .

In this connection the BJP leader recalled that in 1952, he (Prof. Gupta) as a student had taken part in 1952-53, agitation for Ek Vidhan, Ek Pradhan and Ek Nishan and "I fully know that the struggle of the Praja Parishad for removal of all barriers between this state and rest of the country was having the full backing of the late Maharaja" who he said was always opposed to any differential treatment to any community on basis of religion, caste or creed.

BJP leader has also ridiculed the suggestions for concessions to Pakistan for having permanent settlement of the problems in Kashmir and observed that the country cannot afford any more communal division and the only solution to the problems between two can be that Pakistan should be made to realize that religion cannot form the basis of political bitterness, especially when Pakistanis are part of same civilization and moreso, we are all from the one blood.

The BJP leader also disputed the statements of certain semi secessionists that Maharaja Hari Singh was for independent and wanted only limited ties with Indian Union.

Commenting upon the statement of the votaries of self-rule, autonomy and section of separatists of Kashmir that for permanent peace with Pakistan, India should opt for middle path by making Jammu-Kashmir as a bridge between the two countries, Prof. Gupta asserted that Pakistan was created on wrong nations that people with different religions cannot live together and unless this outlook is changed, the problems with Pakistan are bound to stay.

In this regard, he recalled that no country can give bigger concessions to any hostile state as were granted to in wake of the 1971, war. For peace with the neighbour, the unrealistic Congress leadership had not only released over ninety thousands of prisonser of war and returned all the conquered territories but also large areas of Chhamb in Jammu Kashmir were also surrendered to under the Shimla Agreement. At that time too, such pseudo secularists and voteries of autonomy and limited accession of this state, had pleaded that for peace all such concessions are not big one. But what sort of peace has come even after such unprecedented concessions, it is evident from the fact of the cross border terrorism and other hostilities being demonstrated for the past over two decades now. And the people of the entire country, moreso, of this unfortunate state are facing the music but for the follies of 1972, Shimla Agreement, as also those of earlier times.