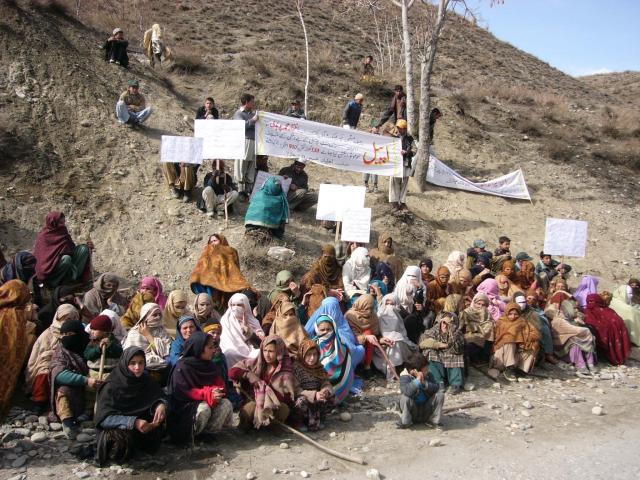 Women came on roads set in protest appealing for justice.

CHITRAL: More than 100 women of Seen Lasht came on Garamchishma road and set in a protest. Talking to local journalist Mrs Jamila and other women told that they living in this areas since their fore father and Shahzada Burkhanuddin has submit a suit in the court of justice claiming that residential houses and other land are his property. The case was also decided in Supreme Court of Pakistan in favor of his grand son Shahzada Gul and they were issued a notice to vacate their houses upto 25th February hence they have no other shelter to settled. They appeal Chief justice Supreme Court of Pakistan  to revive the case. They also appeal president and Premier of Pakistan provincial Governor and Chief Minister to compensate them or provide them alternate shelter and piece of land to be settled there. On other hand when the complainant Shahzada Gul was contacted he showed legal documents to media men and said that the case is under trial since 1973 which was decided by Judicial council of Chitral in favor of my grand father. Hence plaintiff agreed with the verdict but the  other party approach to High court who rejected their plea then they approached to Supreme Court who also dismissed their application for stay order and petition. Now its execution order was decided in my favor by the learned court and they should to vacate my  property he said that before submitting the case for execution order I invited all these people and offered them to admit and accept my property right and I will compensate you but they refused and stressed that this is our property now it was decided by the learned court and they have no option. Meanwhile former Nazim and leader of Pakistan Tehreeki Insaf Chitral have appeal to Federal and Provincial government to compensate the affected people in payment price of the land to its owner where they living or issue them alternate plots or land for shelter.

CHITRAL: Continue strike against suspension of power supply was ended after starting work by Sheshi power house. The strike was observed on the call of Trade union, Driver union and Trucks owners union Drosh. Thousands of anger protesters had blocked main Peshawar Chitral road as protest against suspension of power supply from Sheshi power house which has already been completed. Talking to this scribe Haji Sher Bahadar vice president trade union Drosh said that supply of electricity has been suspended for the last 10 days to Chitral from national Grid station Dir due to damaging of cable and poles at Lawari top after heavy snowfall while Sheshi power project has been completed by Sarhad Hydro power Development Organization (SHYDO)  after delay of 4 years but it not supplying electricity to  Drosh area due to some internal tassels with Wapda  on unit rate. As a result the whole area plunged into dark and they compelled to came on road. The anger protesters observed strike on the call of trade union and they blocked main Peshawar Chitral road at Sheshi bridge. He said that SHYDO staff reluctant to start the power house for power generating but the anger protesters repaired its water channel on self help basis and it started work at 2. 00 AM hence anger protesters ended their strike at 3 O clock (night time) on Saturday. Social and political circle of Chitral strongly condemned and criticized poor performance and delay tactics by SHYDO who badly failed to provide relief to affected people of Chitral as a result people of Drosh came on road and they started power house forcibly.