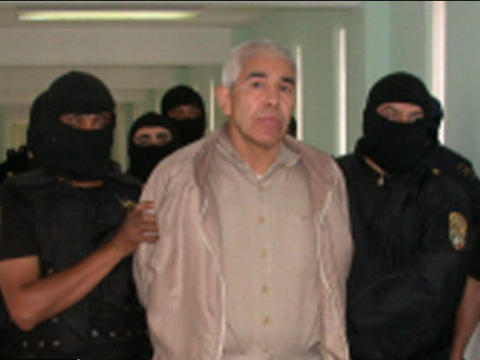 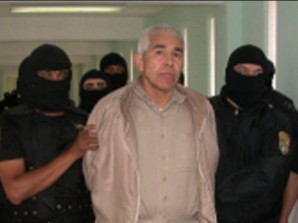 Caro Quintero was freed from jail on August 9, 2013 after a state court concluded that he had been tried improperly. However, amid pressures from the U.S. government to re-arrest him, a Mexican federal court issued an arrest warrant against the drug lord on August 14. He is a wanted fugitive in Mexico, the U.S., and in several other countries.

On October 21, 2013 Senator John McCain of Arizona sent a letter to Secretary of State John Kerry expressing concern over the release of  Rafael Caro Quintero – who was convicted in the 1985 kidnapping, torture and murder of U.S. Drug Enforcement Administration Agent Enrique “Kiki” Camarena.

Even though the Mexican government subsequently issued a warrant for his re-arrest, Quintero remains at large.

A copy of that letter is attached:

I write to express my deep concern regarding Mexico’s release of drug lord and murderer, Rafael Caro Quintero.  Quintero ordered and participated in the 1985 kidnapping, torture and murder of Drug Enforcement Administration (DEA) Agent Enrique “Kiki” Camarena.  His premature release gives all the appearance of a grave injustice to the sacrifice Agent Camarena made in service to the United States.

Quintero’s henchmen kidnapped Agent Camarena at gunpoint outside the U.S. Consulate in Guadalajara on February 7, 1985.  They blindfolded him and brought him to Quintero’s hacienda five miles away where they brutally tortured him for over thirty hours.  The torture Quintero perpetrated shocks the conscience of all decent human beings.  Quintero and his associates crushed Camarena’s skull, jaw, nose, cheekbones and ribs with a tire iron.  They used a power tool to drill a hole in Camarena’s head and repeatedly stuck him with a cattle prod.  As Camarena lay bloody and dying, Quintero summoned a cartel doctor to keep him alive so the cartel could torture him longer.  The doctor injected the anesthetic lidocaine directly into Camerena’s heart and the torture endured for several more hours.  Camarena’s battered and bloodied body was discovered in a shallow grave 70 miles north of Guadalajara several weeks later.

Quintero’s cartel targeted Camarena because he inflicted significant damage to the cartel’s drug trafficking operations.  Quintero led a drug operation that stretched 2,000 miles and created a cocaine pipeline from Colombia to the United States that ran through Mexico.  By tracking Quintero’s finances, Camarena made a series of drug busts inside Mexico, including one that cost Quintero $2.5 billion.  Quintero determined that Camarena needed to be eliminated and accordingly arranged Camarena’s torture and murder.

Despite repeated requests for extradition to the United States, Quintero was tried in Mexico, convicted, and sentenced to 40 years in prison.  Mexican authorities released Quintero in August after just 28 years of the sentence because of a procedural error.  According to a Mexican court official, Quintero should have been tried at the state level rather than the federal level and the error mandated his release.

A 28-year prison sentence is a mere slap on the wrist considering the brutal atrocities Quintero committed.  And yet, Quintero walks free today while Agent Camarena’s family and the DEA are left to question how and why this man can be released early in spite of the unconscionable acts he committed.

Bizarrely, within a week of Quintero’s release, the Mexican government issued a warrant for his “provisional detention.”  That decision to re-arrest reportedly resulted from a request from the United States.  Quintero has yet to be re-arrested, and now, two months later, is still on the DEA’s international Most Wanted Fugitives list.  With no recent developments in this manhunt, the American people need to know that the United States government remains committed to finding Quintero and bringing him to justice.

DEA agents like Kiki Camarena put their lives on the line to defend innocent men, women, and children from the brutal, indiscriminate acts of cartel thugs.  The White House and Department of Justice have said they are “concerned” about Quintero’s release, yet these statements have not resulted in any actions taken against Camarena’s killer.  It is imperative that the U.S. State Department remain committed to pressuring Mexican officials to re-arrest Quintero so that he can continue to serve his prison sentence for the torture and murder of Camerena.  The family of Agent Camerena deserves justice and the United States must ensure that violent actions against American citizens, including the heinous acts of Quintero, do not go unpunished.

In order to address this concern, please provide responses to the following questions by no later than November 4, 2013:

1.         What measures has the State Department taken so far and is intending to take to ensure that Quintero is arrested and retried in the proper court?

2.         Does the State Department have any information about why the Mexican government just recently released Quintero over a procedural error committed 28 years ago?  Have the Mexican authorities made any substantial progress in re-arresting Quintero and re-trying him in the proper court of law?

3.         If Mexico fails to re-arrest or re-try Quintero, what will the State Department contemplate doing to ensure that justice is done for Agent Camarena?

Thank you for your attention to this important matter.  If you have any questions or concerns, please have your staff contact Jack Thorlin, Counsel to the Minority, Permanent Subcommittee on Investigations, at 202/224-3721.