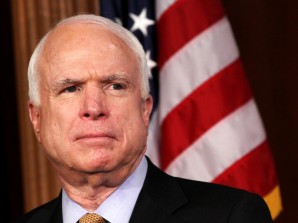 U.S. Senator John McCain (R-AZ) today released the following statement regarding the failure of the second round of Syria peace talks:

“The second round of Syria peace talks ended today with no progress towards a negotiated political settlement to the conflict and UN Special Envoy Lakhdar Brahimi recognizing that failure is looming. In fact, after three weeks of talks, we are moving further and further away from a peaceful political solution in Syria. The Assad regime has accelerated its attacks against the Syrian people with more Syrians killed in the three weeks since peace talks began than at any other time during the conflict. They have continued their deadly barrel bomb campaign in Aleppo city, and refused to act in good faith by detaining hundreds of men evacuated from Homs in violation of the humanitarian agreement. Worse still, the international community is no closer to granting access to humanitarian aid to the thousands of people in desperate need that are caught in government sieges aimed at starving the population into submission.

“The entire strategy for success at Geneva now relies on Russia putting pressure on the Syrian government to engage in a serious and constructive way. Yet, Russia has recently prevented the passage of a much-needed U.N. resolution on bringing aid to desperate Syrian civilians and continues to provide the means by which President Bashar al-Assad carries out his assault on the Syrian people. Such actions indicate that the Russian government is simply not a partner for peace in Syria and cannot be relied on to help secure a successful outcome.

“The only way to achieve success at Geneva is to change the balance of power on the ground. President Bashar al-Assad must no longer believe he can continue his assault on the Syrian people with impunity and the unconditional support of his allies. I am encouraged to hear that President Obama may begin considering different policy options for Syria. There are options far short of an Iraq-style invasion that can, and should, be employed to change the calculation of the Syrian regime, stem the violence, and ultimately achieve a negotiated political solution.”