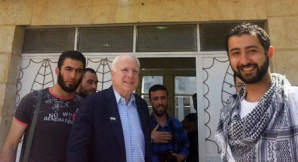 McCain unaware of the danger he was in at the time. Shown here: The guy behind Senator McCain on the left was identified as Abu Bakr Bagdadi. The person on the right in the blue shirt is supposedly terrorist
Muhammad Noor.

The pictures of Senator John McCain and ISIS leader/Caliph Abu Bakr al-Baghdadi are very disturbing to say the least, at least from a security standpoint, because it also demonstrates just how close operatives of the Islamic State terrorist group (then part of al-Qaeda in Iraq) got to him.

I was talking with a couple of friends in a small coffee shop in Hays, Kansas last week, one of whom asked the question: “Why do you suppose they didn’t kill him?”

I told him I thought it was because he was “more valuable to them alive than dead” at the time, especially in terms of the weapons and support the United States was giving the various terrorist groups in Syria (and still are by the way).

Senator McCain is a huge supporter of arming the rebels in Syria. In fact he remains so even to this day.

The only thing that has changed really is the fact we are a nation at war with ISIS (Aka: “The Islamic State of Iraq and Syria”) and the last thing we should be doing is arming anyone in that region without knowing exactly who the hell they are in the first place.

In the picture up top, you can clearly see Senator McCain is oblivious to the danger he was in at the time.

According to an associate of McCain, who declined to be named in this report said “the senator was in no danger at the time and his security was air tight” This same associate refused to discuss prior knowledge or evidence that McCain knew anything about these men’s terrorist ties before the meeting.

We were all in agreement that the photos clearly indicate there was a security risk here.

The problem is nobody is allowed to discuss it with McCain directly or indirectly, who name is being floated around right now as the new Chairman of the Senate Armed Services Committee.

We were all agreed that “whoever was in charge of his personal security should be fired for allowing armed terrorist operatives to get that close to a siting US Senator.” This as the older waitress, chewing bubble gum looked at us funny when she refilled our cups with fresh coffee and interrupted our conversation by asking “if we want more pancakes and eggs with that coffee?”

We sat for a long time looking at each other quietly as we thought about the implications of all this on the career of a man we all admire and respect.