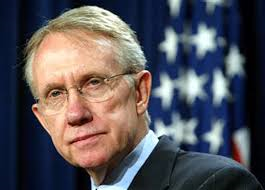 “Regrettably, a small group of Senate Republicans has determined it is in their political interests to hold this legislation hostage’, said a pissed off Harry Reid last night.

On December 13, 2014 Senator Harry Reid asked for permission to address the United States Senate regarding the legislation to fund the US Government past midnight:

“Mr. President, I won’t use a lot of time here this morning because we have a lot to do.

We worked for a long time yesterday, into the late hours of the night, trying to secure an agreement to vote on a long-term government funding bill. I was last talking to the chairman of the Appropriations Committee at 11 o’clock last night.

Regrettably, a small group of Senate Republicans has determined it is in their political interests to hold this legislation hostage. They objected to an agreement that would allow us to vote on Monday night. We are now relegated to watching time tick away on our clocks just so we can keep the government open and funded. I remind everyone that at 12 o’clock midnight–12 a.m.–the U.S. Government, tonight, runs out of money.

We even tried to get an agreement last night to extend government funding for a few extra days while we worked to pass the long-term funding bill, but the Republicans wouldn’t let us do that.

So now we wait. But while we wait, we shouldn’t waste time. Republicans and their leader have known for weeks, if not months, that we intend to vote on the President’s nominations. So it is clear that this impasse we are having here today is not about nominees, it is about preventing us from funding the government. So now, on the eve of our government running out of funding, Senate Republicans are forcing completely unnecessary procedural votes just to waste time and slow us down from funding the government.

It doesn’t have to be this way. We can still come to an agreement to take care of funding for our great country right now.”