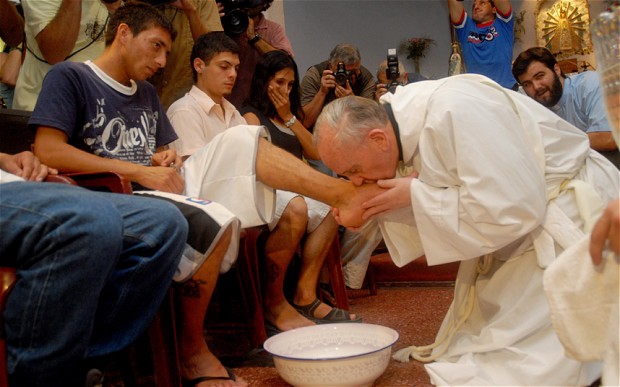 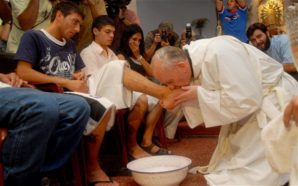 Pope Francis “kisses” the feet of a poor person after washing it with his tears in Buenos Aires.

The following is a heartfelt letter I received from Senator Bernie Sanders, an old and trusted friend regarding economic disparity in the United States and Pope Francis:

The greatest crisis facing our country today is the obscene level of wealth and income economic inequality we now see.  This is a moral issue, an economic issue, and a political issue.

While the very rich get richer, the middle class continues to disappear and we now have more people living in poverty than ever before.  Despite huge increases in technology and productivity, tens of millions of workers are finding it harder to feed their families, pay for health care, send their kids to college or put aside savings for retirement.

While large corporations are earning record-breaking profits, real unemployment is close to 14%, and youth unemployment is at 20%.  An entire generation of young people is struggling to find a place in the economy and repay their college loans.

In recent years, with 95% of all new income going to the top 1%, we have seen a huge increase in the number of millionaires and billionaires. One family, the Walton family of WalMart, now owns more wealth than the bottom 40% of Americans. Meanwhile, we continue to have, by far, the highest rate of childhood poverty in the industrialized world.

While the average American is increasingly alienated from the political process, billionaire families like the Koch brothers are spending hundreds of millions of dollars to elect candidates who support their extreme right-wing views.

During the last week a new and important ally has arisen in the struggle against unfettered capitalism and wealth and income inequality.  In his recently published Exhortation, Pope Francis warns the world against the idolatry of money and the false promise of trickle-down economics.

Clearly, not everyone shares Francis’ religion, and many of us have deep differences with a number of positions taken by the Catholic Church.  Nonetheless, we can all, I think, share his commitment to economic justice and learn from his wise assessment of how modern civilization, in its relentless pursuit of profit and its dependence on “the market” to make final valuations of what is good, has lost touch with the ethical imperatives that should guide our society.  I appeal to other religious leaders to focus on matters of economic justice and to speak out from the context of their own respective traditions.

These are tough times for our country. Let’s go forward together. Thanks for your continued support.

Filed under: Christian, Lifestyle
Share Tweet Pin G Plus Email
previous article: Saudi preacher says it is lawful to murder women and children when done as collateral damage resulting from the lawful aim of killing infidels
next article: NC nothing to show in the name of its 5 year achievement: Mufti