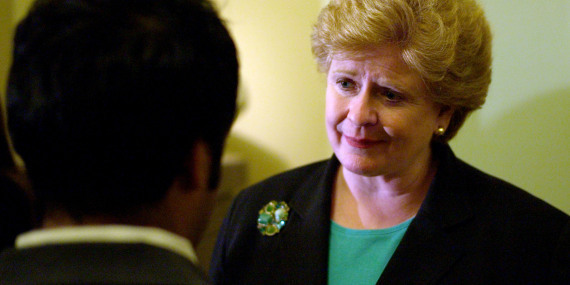 Senator Stabenow admits her father was “bipolar” for years. Doctors say about 4% of people suffer this mental disorder.  The cause of bipolar is at least partly “genetic” as such the senator is at higher risk than others within the population of being diagnosed with the disorder herself.

On October 31, 2013 (Halloween) Senator Debbie Stabenow of Michigan asked for permission to address the United States Senate for a few minutes regarding the issue of mental health in the community. During that time she admitted that her father was “bi-polar” and went undiagnosed for years.

“I think so many of us have been touched by mental health issues, which is part of physical–it is not mental and physical health. I think it is about time. I know my friend would agree that we start treating illnesses above the neck differently than illnesses below the neck. It is all about comprehensive health care. We have all been touched in some way.”

“My father went undiagnosed with a bipolar disorder for 10 years when I was growing up. When he finally received the help he needed, the medication he needed, he was able to work and be successful for the rest of his life. I wish to make sure every family has that opportunity”, said Senator Stabenow (source: Congressional Record http://thomas.loc.gov).

“About 4% of people suffer from bipolar disorder”,   according to Wikipedia (http://en.wikipedia.org/wiki/Bipolar_disorder).

There are approximately 5.7 million people in the United States with bipolar disorder…

Since Stabenow’s  father was bipolar the likelihood of Senator Stabenow having the same bipolar disorder is higher than average.