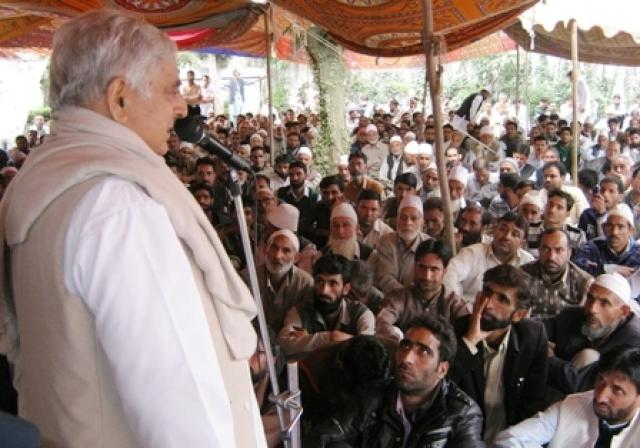 Jammu, September 25 (Scoop News)- Patron of the Peoples Democratic Party (PDP) Mufti Mohammad Sayeed today said that chaos and confusion is prevailing in the State due to lack of confidence among those who are running the coalition government headed by National Conference. He observed that there is a sense of insecurity and fear among the common masses because the government has failed to perform its duty to provide security to the people.

Addressing a meeting of the office bearers of the party from province, Mufti made a mention towards killings of Panchayat members and said that this regime has failed to provide stability in the State.

“The State has been witnessing turbulent situation since 2009 after formation of this coalition regime,”, he said and added that an atmosphere of insecurity, anarchy and confusion still prevailing in the state.

While mentioning towards statement of Chief Minister in which he has stated to take up the issue of killings of Panchayat members in Unified Command, he said that this statement reflects lack of confidence among those who are at the helm of the affairs.

He observed that prevailing chaos and uncertainty in the State were result of the failure of the present regime to connect itself with the common masses. “Instead of connecting with the common masses, the state government has been further complicating the situation through its mis-deeds and wrong doings”, he said.

“From the day one when this government was formed, there is instability and uncertainty in the State and this situation is further worsening with every passing day”, he said.

Lambasting coalition regime for its failure to create confidence among Panchayat members, Mufti regretted that the present dispensation has undermined all democratic institutions be it Urban Local Bodies, Panchayats or Assembly.

“Non serious attitude of the government to strengthen Panchayati Raj Institutions can be gauged from the fact that after passing of more than one year elections of Block  Development Council and District Development Council are yet to be held”, he said. He also took coalition partner Congress to task for adopting double standard on empowering Panchayats. “On the one hand Congress leadership has been demanding implementation of 73rd  and 74th amendments in the state while on the other the Congress has failed to convince the government to conduct elections of Block and District development councils”, he said.

He further added that local Urban Local Bodies elections were scheduled to be held in the month of February in 2010 but the government has been delaying these elections.

Observing that there was no agreement between coalition partner National Conference and Congress, he mentioned that Deputy Chief Minister who belongs to Congress party also holds the portfolio of Urban and Housing Development Department.  Congress, which is partner of the government, can not escape from its responsibility of delaying civic bodies elections

Mufti flayed the coalition government for its failure to bring transparency and accountability in the system. “Although the corruption has been sneaked into the government from top to bottom, the anti-graft institutions like State Accountability Commission (SAC) have deliberately make non functional by the State Government”, he said and pointed out that instead of allowing the SAC to take action against the corrupt politicians, the government has fighting cases of its ministers in the court against the SAC.

The former Chief Minister reminded that during PDP led regime was made special focus areas because the successive governments at had provided all possible help for restoring peace and accelerating developmental activities in this region. “It was all due to the credibility of the PDP that previous NDA regime and present UPA government had provided all possible help to the PDP led regime”, he said and Prime Minister Dr Manmohan Singh has contributed a lot in the economic development of the State.
“It was all due to the efforts of PDP that first time after 1947 was brought to the development map of the country”, he said and listed various developmental projects initiated during PDP-Congress regime in region.

Reiterating resolve of his party to treat all regions and sub-regions equally, he said that during PDP led regime all regions were treated equally. He said that it was result of the good works of the party that PDP has earned credibility of the people. “PDP has changed political discourse of the State because this party has emerged as alternative of the National Conference and has restored peoples’ faith in the democracy and democratic institutions”.