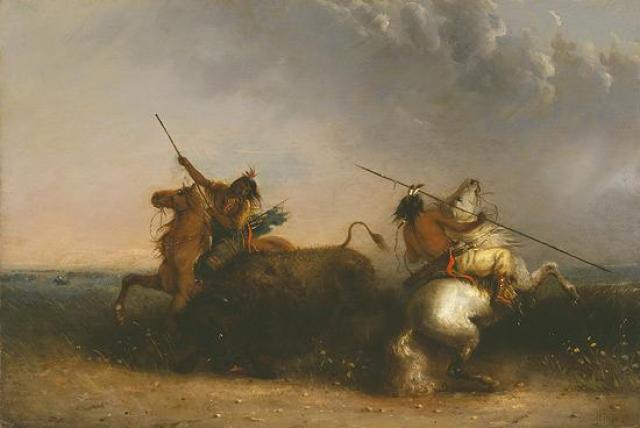 FORT WORTH– The second floor of the Amon Carter museum welcomes art admirers with a huge painting of Alfred Jacob Miller. “Cavalcade (1839),” one of the biggest paintings Miller painted for his patron Sir William Drummond Stewart, is a picture of the American West showing   the procession of Shoshone, a Native American tribe,  in honor of Stewart and his party. Gazing at the magnificent piece of this oil art on canvas, you can figure what "Sentimental Journey: The Art of Alfred Jacob Miller” is all about.

Miller (1810-74) was the first American artist to journey in the heart of the Rocky Mountains and paint on the subject. Miller’s father, a grocer, exhibited his son’s paintings in his shop when an art collector, Robert Glmore Jr., saw and sponsored his study in Europe from1832 to 1834.

In 1837, after returning from Europe, Miller joined an expedition to the American West with Stewart and captured the people, tradition and lifestyle of the place and its people.

In “Buffalo Hunt (1839)”, Miller has portrayed the scene of Indian life. This oil painting on canvas, with the Rocky Mountains in the background, shows the Indians hunting for buffaloes.  Stewart called this painting “a perfect bewilderment of pleasure,” for the Indians.

The exhibition also has one of Miller’s best-known paintings, “Fort Laramine (1851).” Another of his oil painting on canvas, Miller was the only artist to record the appearance of the original fort, an important station along the Oregon Trail, one of the migration routes on the North American continent. Miller, in one his notes described this subject as: “Tribes of Indians encamp here 3 or 4 times a year, bringing with them peltries to be traded or exchanged for dry-goods tobacco, vermillion, brass and diluted alcohol.”

A series of paintings called the “Trapper’s Bride” add an aesthetic to the exhibition. This is one of the six paintings Miller painted after he returned to his hometown Baltimore; the original painting he did for Stewart was lost. Three of these paintings, “Bartering for a Bride (1945)” and “Trapper’s Bride (1946) (1950)” colorfully displays a woman being handed over to a man. However, the hand gestures vary in the paintings—from their hands just about to touch to hand in hand.

Most of Miller’s magnificent and visually captivating paintings are oil-based on canvas. But he also showed his mastery in other mediums such as watercolor and pen and ink.

In “Horse Market, Swan Street (1830),” Miller uses charcoal, ink and gouache on paper. This sketch projects the scenes of daily life in Baltimore. Miller usually drew his art in scrapbook to entertain friends and family.

Miller also worked with watercolor, and among his well-known paintings is “Building a Fire,” in which he shows Indian men at work on a routine daily task.

Most of Miller’s paintings seem to depict animals. It could be because animals were a part of the Indian lifestyle, and Miller also had a personal fascination with the horses; “Fontenelle chased by a Grizzly bear,” “Indian Race” and “Wild Horses” are evident examples.

Miller has captured the essence of the Indians in his paintings. From “Campfire/Preparing the Evening Meal” to “Indian encampment near the Wind River Mountain (1837),” he has portrayed their daily lives. In “Trial of skill—With Bow and Arrow (1837),” painted in pen and charcoal, Miller has remarkably captured the bow and arrow as a symbol of authentic American life; it shows them as brave warriors.

In this exhibition, some of Miller’s portraits are also on display including his self-portrait. Of others are “A young woman of the Flat Head Tribe (1858-60)” and “Portrait of Captain Joseph Reddford Walker”, another of his great artistry using oil on canvas.

"Sentimental Journey: The Art of Alfred Jacob Miller” exuberantly displays the lifestyle and tradition of the Indians in the Rocky Mountains. Miller has framed the late 1830s, his time touring with Stewart, visually in the 80 paintings being displayed in the museum. Miller’s work truly evokes the sentiments of the gone era and gives people an opportunity to picture it through his artistry, color and brush strokes.