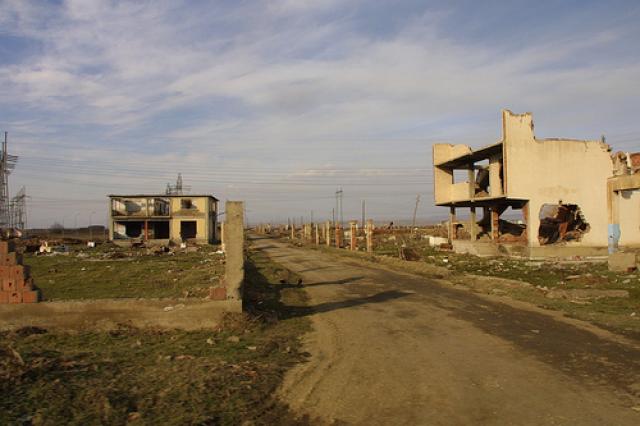 Hague tribunal judges this week acquitted Kosovo’s ex-prime minister Ramush Haradinaj and his co-accused Idriz Balaj of all charges in their indictment which alleged they were responsible for war crimes committed in Kosovo between March and September 1998.

The third accused, Lahi Brahimaj, was found guilty of cruel treatment and torture and sentenced to six years in prison.

The three former members of the Kosovo Liberation Army, KLA were charged with violations of laws or customs of war, including murder, torture, rape and cruel treatment of Serb civilians and the mistreatment of other civilians perceived to be collaborating with Serbian forces “or otherwise not supporting the KLA”.

When presiding judge Alphons Orie read the trial chamber’s decision, the public gallery which was packed with people, exploded with loud cheers, after which Orie had to intervene and demand silence in the courtroom.

Not surprisingly, the judgment caused a furor in Serbia, where one official said the verdict shows that “this court does not exist to mete justice", and will not “encourage Serbs and other non-Albanians to expect a safe and peaceful life in Kosovo in the future”.

Haradinaj, Balaj and Brahimaj faced charges of participation in a joint criminal enterprise, the aim of which “was to consolidate the KLA’s total control over Dukagjin area in north-western Kosovo”.

However, the trial chamber found that based on evidence presented, it was not satisfied “beyond reasonable doubt that there was a joint criminal enterprise with the objective of targeting the civilians, [and] therefore the three accused could not have participated in it”.

At the time relevant to the indictment, Haradinaj was a commander of the KLA in the Dukagjin area; Balaj was in charge of the Black Eagles Unit within the KLA; and Brahimaj was a KLA member stationed in the force’s Jablanica headquarters in the Djakovica municipality.

The three accused were also acquitted of all counts alleging crimes against humanity. Evidence presented by the prosecution “did not always allow the chamber to conclude whether a crime was committed or whether the KLA was involved as alleged”, Judge Orie said on April 3.

“The evidence on some of the other counts indicates that the victims may have been targeted primarily for reasons pertaining to them individually rather than as members of the targeted civilian population,” the judges found.

They also ruled that the ill-treatment, forcible transfer and killing of Serb and Roma civilians as well as Kosovo Albanian civilians was “not on a scale of frequency that would allow for a conclusion that there was an attack against a civilian population”.

However, Judge Orie highlighted the significant difficulties encountered by the trial chamber in securing testimony of a large number of witnesses. Out of 100 prosecution witnesses whose evidence was received, 34 were granted protective measures and 18 issued with subpoenas.

“The chamber gained a strong impression that the trial was being held in an atmosphere where witnesses felt unsafe,” he said reading the verdict.

Since the trial began in March last year, prosecutors contended that witness intimidation was a major stumbling block to the proceedings.

In her opening brief at the start of the trial, then chief prosecutor Carla Del Ponte said that “prosecutors [would] not have an easy task in proving the charges” against the three.

She added that witness intimidation was a major obstacle in this case, and had left many reluctant to come and testify.

After reading the verdict, the trial chamber ordered the immediate release of Haradinaj and Balaj from the tribunal’s custody, while Brahimaj returned to the detention unit.

"This decision of the Hague tribunal represents a mockery of justice and a mockery of the innocent victims who suffered at the hands of Haradinaj," Serbia’s prime minister Vojislav Kostunica said in a strongly-worded statement issued shortly after the judgment was announced.

Serbian president Boris Tadic said, “This verdict will not see justice done and it will not encourage Serbs and other non-Albanians to expect a safe and peaceful life in Kosovo.”

Tadic claimed that Del Ponte had told him that prosecution witnesses in the case were intimidated and even murdered, in order to keep silent about Haradinaj’s alleged crimes committed in the Kosovo in 1998.

Serbian deputy prime minister Bozidar Djelic said that Haradinaj’s acquittal was “scandalous” and a "black day for international justice". He added that “this verdict dealt a serious blow to the reconciliation process among nations in the Balkans and the responsibility lies with the tribunal”.

Serbia’s War Crime Prosecutor Vladimir Vukcevic told the Belgrade media that he was stunned by the verdict. However, he added that the prosecutors at the Hague tribunal had made a huge effort to put Haradinaj on trial and to secure an appropriate sentence.

However, with so many witnesses who were too frightened to testify, the outcome of the trial was not surprising, he added.

According to Vukcevic, “Nine very serious witnesses linked to the Haradinaj case were killed between 2003 and 2007, and one survived an assassination attempt.

“It’s not surprising that so many witnesses refused to testify and had to be subpoenaed – their life and lives of their relatives were in danger.”

Although it was not immediately clear whether the prosecutors would appeal the judgment, Vukcevic said he expected them to do so.