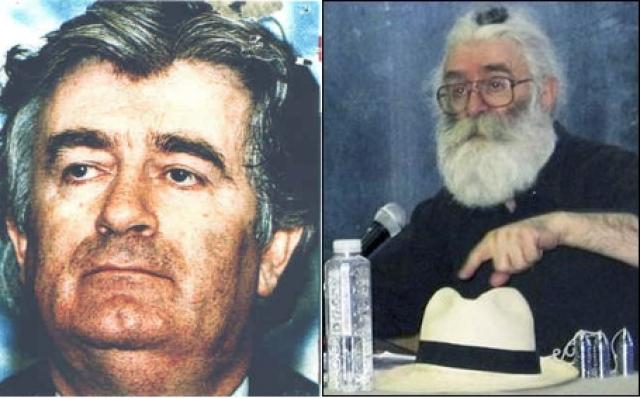 On July 22, Rasim Ljaljic, president of the National Council for Cooperation with the Hague Tribunal, and Vladimir Vukcevic, a war crimes prosecutor, held a press conference about the arrest of Radovan Karadzic a day earlier.

They said that Radovan Karadzic lived in Belgrade under false name of Dragan David Dabic. He was disguised as an alternative medicine doctor and even worked in one private clinic in Belgrade. He also was a contributor to the Healthy Life magazine and took part in forums and lectures, gathering up to several hundred people. At the time of the arrest, Radovan Karadzic (aka Dragan Dabic) had long hair and a white beard.

Dragan Dabic had an official web site. Here is what is says there (SRP):

Dr. Dragan “David” Dabic was born some 60 years ago in a small Serbian village of Kovaci, near Kraljevo. As a young boy, he liked to explore nearby forests and mountains, spending a lot of time on Kopaonik mountain, where he used to pick the omnipresent natural and potent medicinal herbs that grew there.

As a young man he moved to Belgrade, and then on to Moscow, where he graduated with a Psychiatry degree from the Moscow State University (Lomonosov). After Russia, Dr. Dabic travelled around India and Japan, after which he settled in China, where he specialized in alternative medicine, with a special emphasis on Chinese herbs. In the mid-1990s, Dr. Dabic returned to Mother Serbia for good.

Since then, Dr. Dabic has emerged as one of the most prominent experts in the field of alternative medicine, bio-energy and macrobiotic diet in the whole of the Balkans, and is a frequent guest on many forums, seminars and symposiums (Belgrade, Novi Sad, Pancevo, Sombor, Smederevo…) dedicated to these topics.

For panel invitations or private consultations, Dr. Dragan Dabic can be reached at the following contact:

According to B92, the editor of Dabic/Karadzic at Healthy Life, Goran Kojic, was stunned to discover that he had published articles written by a man accused of grave war crimes:

He would come and communicate with me personally, and it’s really interesting that I never saw in that man… that it was the last thing on my mind, that this was Radovan KaradÅ¾iÄ‡. We never discussed politics or anything of the sort either.

Bloggers have different opinions on one of the most wanted fugitives in the world – Radovan Karadzic aka Dr Dragan David Dabic.

Niko, in the his post titled “Dr. Dragan Dabic,” writes quite ironically (SRP):

The man who was sitting next to my mother at the Hotel Intercontinental.

The man who introduced himself to participants […] as a doctor speaker next month – August – in the same place.

The man common folks trusted and applauded, healthy and sick ones were giving credit to him.

The man who is a such hero and patriot that he changed his own name, who isolated his own country and who made his own people suffer, who did not want to go to the Tribunal in the Hague and tried to defend himself and in this way tried to save his own pride and the pride of his country.

Their hero is a man who, unlike them, might not to introduce himself by his own name. The incarnation of patriotism for them is the man who has changed his identity in order to be unknown.

Idiots, your hero has always been Dr. Dabic. Change your t-shirts.

Burek, a blogger from Tuzla in Bosnia and Herzegovina, believes (BOS) that the victims of the Srebrenica massacre will get some satisfaction, following the arrest of Radovan Karadzic:

[…] We’ve heard that Dr. Dragan Dabic alias Radovan Karadzic, an alternative medicine doctor, has lived quietly in Belgrade for the past few years. It was very difficult to identify him because he had long gray hair and a beard, said the police from Serbia. Although it is difficult to believe in that, let’s ask a question why, after so many years, the killer from Durmitor was arrested only in July? It is difficult to answer exactly, but it is not necessary to waste time on that. At the moment, the most important thing is that he has been arrested. It is also important that he looks healthy and will be able to participate in the trial. […]

Finally, the victims of the most terrible massacre in Europe since World War II could get some satisfaction. […]

Danilovic is apparently disappointed because of the arrest of Radovan Karadzic. He writes (SRP):

The process of establishing a democratic system in Serbia is a very long one and it implies a lot of international obligations. One of them was the arrest of Radovan Karadzic. In that context, Dejan Jovic concludes (SRP) in his post on B92’s blog platform:

[…] The arrest of Karadzic is great news. The friends of democracy in Serbia were waiting for it very long. Now Serbia will have an opportunity to establish authority of the democratic and pro-European forces. For the first time since 1989, Serbia has got a chance to become a respectable European country. At the same time, this arrest presents a very hard challenge for nationalist forces. Democratic Serbia should not miss this chance.