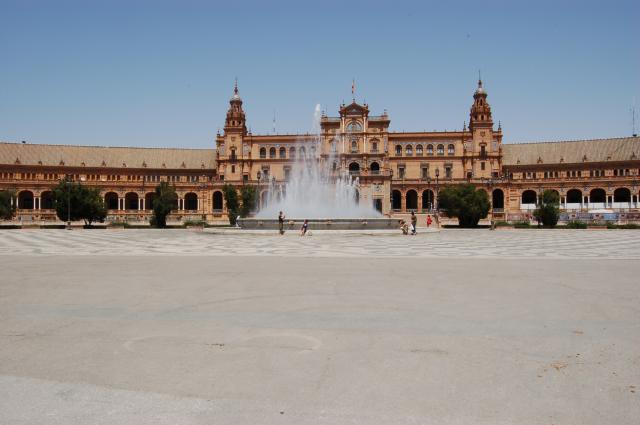 Spanish Southern region of Andalucìa is one of the fascinating places that the European continent has to offer. Its charm stems from its turbulent past, when it was conquered by Arabs and then Christians.

A Gypsy sub culture attracts tourists to sensual shows of Flamenco and to its own district in the heart of Seville, Triana.

A square that attracts tourists for its striking beauty and the amazing palace that surrounds it, is Plaza de Espana, close to Parque Maria Luisa.

What my travel companion and I found out (unfortunately too late) is that the whole area is sadly famous for its high level of micro criminality.

The overwhelming heat of Andalucian summer distracts tourists from paying attention to the dangers of bag-snatchers.

When a sleazy young man asked me for information about a place in the city I didn’t realise it was just an excuse for distracting us so that his partner could steal my friend’s bag.

Spontaneously we thought to ask for help to the local people and that was our first mistake. They told us to go behind a door and we would have found our bag without the money. We went (second mistake), with the risk they could also steal my bag, and we didn’t find anything.

In the meantime, the thief came back and put the bag close to where we were when it disappeared. Of course inside the purse there was only the passport, wallet and mobile phone were gone.

We asked for the number of the police and they wouldn’t tell us, simply stating they didn’t even know where the closest police station was and advising that the police couldn’t do anything. Result (and third big mistake), we didn’t go to the police.

The first guy we’ve asked, who was laying down sunbathing, at first spoke english pretty well and pretended to be surprised and want to help us. Ath the end, when we asked him whether this had happened before, he didn’t understand and he didn’t speak english anymore.

Thinking of what happened, I can be quite sure that all the locals who pretended to help were involved, trying to distract us from understanding how things really were, that this is a special treatment for tourists and the best thing to do after getting back your passport is to go to the police.

The city is awsome and it is a real shame that such people are allowed to live in it making its reputation dirty.

Since the police is doing nothing to improve the situation, tourists need to be very careful in every city in Andalucia, with particular attention to Seville and Malaga.