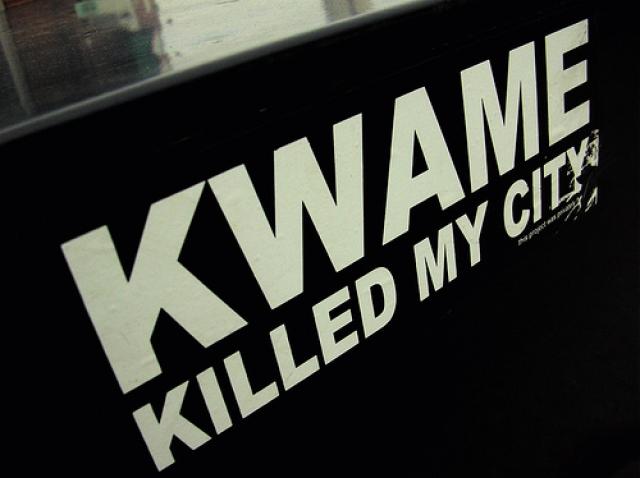 "I’m deeply disappointed. I will remain focused in moving this city forward…Lying cannot be tolerated, even if a judge and jury can see through it and doesn’t buy the line. Witnesses must give truthful testimony," said Detroit’s Wayne County Prosecutor Kym Worthy early on Monday afternoon.

Meanwhile, 38-year old, seventh-year Detroit Mayor Kwame Kilpatrick stated publicly that he is confident of being granted "full and complete vindication" of the perjury, obstruction of justice, conspiracy, and misconduct charges–eight felony charges in all–that were announced against him this morning.

Kilpatrick’s former chief of staff Christine Beatty is also being charged with seven counts of felony.

"This has been a very flawed process from the very beginning. However at the same time I recognize this is merely the first step in a process that I believe in that is grounded in the presumption of innocence that is guaranteed to each American citizen by the Constitution of these United States. I look forward to complete exoneration once all the facts surrounding this matter have been brought forth," stated Kilpatrick to the press.

All this sound and fury concerns a scandal in which Kilpatrick, who is a married man, had a sexual affair with Beatty, and then with Beatty’s complicity lied under oath about the whole thing when they were investigated.

Kilpatrick, of course, issued the programmatic and hollow public "apology" to his lawfully wedded wife and his other wife (his constituency). His wife thus far has programmatically refrained from publicly demanding the public caning of her husband, who, programmatically, wasn’t even at the scene of the crimes he committed.

Kilpatrick and Beatty might as well both be saying, "Wasn’t me."

Perhaps most disgusting of all, however, is the fact that the media messiahs once again, just as they did when reporting on The Spitzer, are straining themselves to make sure they avoid stating that Kilpatrick is a Democrat.

Somehow, in the U.S., the Conservatives get raked over the coals and eaten for dinner, with leftovers had for breakfast the next day, for even maybe failing to live up to a marital commitment-such as by, say, tapping their feet in the men’s bathroom while sitting on the hopper just at the very moment when a police officer is running a personal sting operation to trap gay men looking for gay sex-by these very same media messiahs, who are always quick and hungry to pounce on the fact that the possible criminal is a member of the Republican Party. Meanwhile, the Socialists (Leftist Liberals) boldly issue hollow apologies with their cheated-on wives standing faithfully as cold statues at their sides and then ride off into the sunset with full purses and the likelihood of rising again one day (and probably sooner rather than later), and the media won’t ever mention their party affiliation (Democrat). And the apology and fake humility are reported in bold-face, while the crime, which has already been admitted to or severely prosecuted because of overwhelming evidence (such as saved text messages), is gently whispered about, almost as an afterthought.

Methinks the Lefties come up with so many conspiracy theories in order to draw attention away from their actual conspiracy.