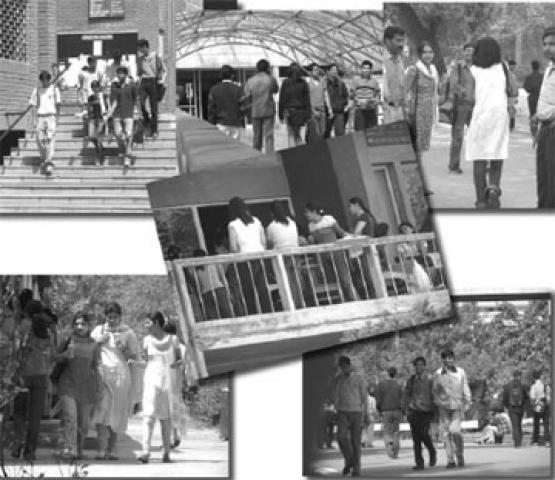 NEW DELHI: Delhi University’s Ramjas College Vice-Principal B. N. Ray on Thursday found himself at the centre of an unsavoury controversy with male students of the college accusing him of “sexual harassment”.

The agitated students, accompanied by some faculty members, shouted slogans and burnt effigies of Mr. Ray inside the college premises in the morning demanding immediate action against him for “violating all norms of decency and blatantly misusing his power and status to bring disrepute to the profession and the college”.

In a resolution submitted to Principal Rajender Prasad, students from the Political Science Department said: “There have been proven charges against Mr. Ray of sexual assault and abuse of students, both inter and intra-departmentally. In addition, there are charges of abuse by students of other colleges.”

Talking on condition of anonymity, a faculty member of the college said: “A lot of cases have been piling up against Mr. Ray. It was alleged that he would call students to his residence, intellectually hypnotise them, and make sexual advances. The students called a general body meeting on Thursday where about a dozen ‘victims’ shared their experiences with the others. They told everyone how Mr. Ray has been misusing his position and power as the vice-principal and head examiner.”

For his part, Dr. Rajender Prasad said this was the first time such a complaint had been brought to his notice and that the matter had been referred to the college complaints’ committee.

“The committee comprising teachers, students and a non-government organisation will look into the charges against Mr. Ray. We have to know the other side of the story as well. If the interim report finds him guilty, the matter will be placed before the Governing Body of the college,” said Dr. Prasad.

“I have been teaching in this college for the past 34 years. How come there was no complaint against me ever before this ? Had these allegations been true, at least someone would have complained against me.”