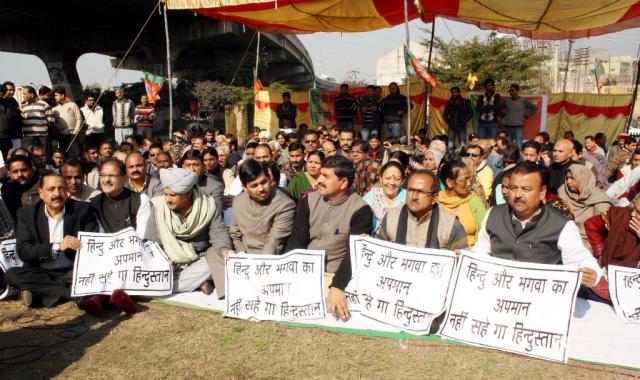 Addressing a protest dharna of Jammu Mahanagar BJP organized under Disttrict President Rajesh Gupta on Thursday,he said that it is not a slip of tongue by Shinde but a well planned statement by the Congress leadership that is why Digvijay Singh and Mani Shankar Ayer are also supporting him. He said that if BJP had to promote Hindu terrorism, then after partition would have become a “Hindu Rashtra” (Hindu Nation) but had strong secular roots.  BJP and other nationalist organizations associated with it have always fought for the country’s integrity and against foreign aggression from time to time and they have been in the service of the nation without any consideration of religion, caste or creed, said Hussain.

Accusing J&K Chief Minister Omar Abdullah of opportunist politics, he reminded him that when Atal Behari Vajpayee made him a Cabinet Minister in NDA and promoted him on all occasions, BJP was not communal rather it was Congress which was communal in eye’s of Omar. He said  Omar Abdullah should better drive the vehicle in Rajouri, Poonch and other areas instead of driving Rahul Gandhi’s vehicle in streets of Amethi.

State President Jugal Kishore Sharma said that whatever had not be uttered by even a foreigner has been easily said by our union Home Minister. It has hurt the nationalist people and is not tolerable. Such a statement from Shinde raises suspicion whether some foreign hand is working with the Congress to paint BJP and RSS as communal, he added.

Dr. Nirmal Singh said that Shinde’s statement is a follow up of Congress’ negative approach towards BJP and RSS. It is the same Congress which even once banned RSS but later had to eat a pie of shame as it could not prove its allegations. He said that the 2014 elections have made Congress unstable from within and its leaders totally in a stage of fear of losing power.

Ashok Khajuria, while making sarcastic comment of Shinde, said that Shinde is not grah mantri (home minister) but a grah matri  (evil minister). Rahul Gandhi says that Congress has DNA of India, Rahul must first get his own DNA tested. He said that the BJP will not allow the destructive designs of Congress and NC succeed in the state.

Shamsher Singh Manhas said that the Congress is in habit of issuing baseless statements against BJP from time to time in order to divert the attention of the people who have very well understood the credential of Congress leadership and are now making up their mind to throw it out of power.

BJP State Chief Spokesperson Dr. Jitendra Singh said that injudicious statement by Shinde has provided opportunity to anti-India terrorist like Hafiz Sayeed to seek a misplaced vindication. He said is the only country in the world where the Home Minister calls nationalists as terrorists and talks of rehabilitating known terrorists.

State Vice-Presidents Chander Parkash Ganga, Ramesh Arora, Vibodh Gupta and Sakina Bano   said that it is most unfortunate that our country has people like Sushil Kumar Shinde on important posts. He said that even those people who voted in favour of Shinde might be feeling insulted and shame for returning him to the parliament.

State General Secretary & former Mayor Kavinder Gupta said that the need of the time is to expose the Congress for its campaign against BJP and RSS. He said that whatever has been said by Union Home Minister is a mere frustration and fear of defeat.