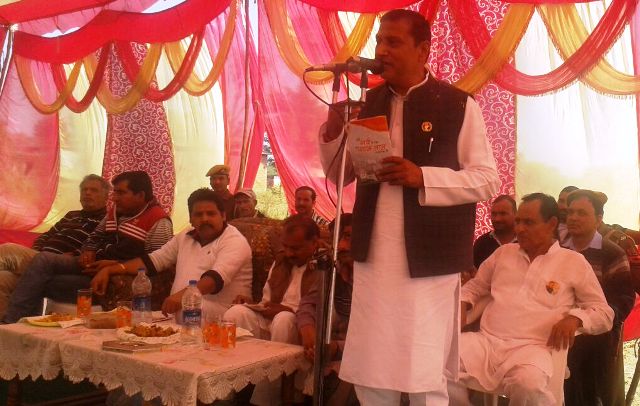 Akhnoor(Jammu), November 20, (Scoop News)- Lambasting BJP for issue of displaced persons of PoJK, senior Congress leader and Minister for PHE, Irrigation & Flood Control, Sham Lal Sharma today said BJP Government in the Centre does not want to help these distressed people and trying to sabotage their emotions
Addressing a huge gathering of people at Garkhal the Minister said that BJP should clarify its stand on Article 370 and POJK Refugees settlement. He said that BJP shall not be allowed to destabilize the constitutional dimensions in the political sensitive state like Jammu and Kashmir which has claimed and constitutional aspect of Article 370. It indicates the ill intention and non-serious approach of the BJP Government in the Centre. This will have a serious repercussion as lakhs of displaced persons, who are fighting for their just cause, will teach a lesson to the BJP, if they do not get their dues, said the Minister.

Saying that the issue of PoJK displaced persons remained hanging in the air for over six decades, Mr. Sham maintained that Congress party, which had the agenda for resolving this long pending issue maintained tremendous pressure on its Coalition partner, National Conference and was able to get the issue of rehabilitation package approved by the State Cabinet and referring the same to the Central Government for sanction. But, it is unfortunate that the issue has not been dealt as per its merit and sensitivity by the BJP Government and unnecessary connected it with non-State issue. He has warned the BJP Government in the Centre to approve the package without any further delay and tinkering or connecting it with other issues, said the Minister. Questioning the BJP’s stand on the issue, the Minister said that the party which always advocated for the cause of rehabilitation of the displaced persons and continue to corner the successive Governments in the State for ignoring the plight of these people, but their sympathy with these people has proved stab on the back. Clubbing the non-State issue with the proposal of the PoJK displaced persons is a direct attempt to sabotage the issue and is a double standard on the part of BJP.