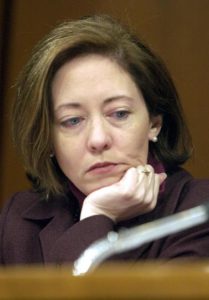 “Nationally, more than half of those with serious mental disorders don’t get the treatment they need to lead productive healthy lives”, said Senator Cantwell.

On March 31, 2014 Senator Cantwell of Washington spoke in favor of the Excellence in Mental Health Care Act in Congress. Here is some of what she had to say on this important issue:

“Mr. President, we took an important step today to improve the lives of millions of Americans who deal with mental illness. I am talking about the Excellence in Mental Health Act, which was included in the provisions of the legislation we just passed this evening.

I thank my colleagues, Senators Stabenow and Blunt, for their leadership on this bill. Senator Stabenow just gave a very passionate history of why she has been so involved with this issue. People may not realize that she has been working on this since 2005. So I thank her for that leadership because around here it takes time to get things done, and she has never forgotten how important this is for those with mental illness and the loved ones and family members who care about them.

This legislation was bipartisan legislation, and that certainly helped us get the bill passed. It was something I was happy to cosponsor with SenatorStabenow when we worked it through the committee and then also when we tried to get it included in this latest package. So I am proud to be here tonight to thank her and Senator Blunt for their leadership in getting this done.

This legislation improves access to community health centers and leads to better quality of care. It will give access to those participating States that are fortunate enough to be in this first phase of a pilot program, and it will help local governments and health care systems that are all plagued by these challenges. Most importantly, it will help save lives.

Community mental health treatment centers are struggling because they are trying to meet the demand and do so within the balance of their budgets. According to the National Alliance on Mental Illness, States have cut more than $1.6 billion in mental health funds since 2009. So here we are with a very pervasive problem and budget tightening, which, obviously, causes big challenges. What are those challenges? Basically too many people falling through the cracks.

Nationally, more than half of those with serious mental disorders don’t get the treatment they need to lead productive healthy lives. In my State, the State of Washington, 55 percent of those with mental illness are not getting treatment. That translates to 500,000 people who are not getting the help they need, according to the Substance Abuse and Mental Health Service Administration. When they reach a crisis point, it is not just a burden on them and their families but on our communities, our hospitals, and our criminal justice systems. As a result, our jails and our emergency rooms have become the mental health clinic of last resort.

As the Tacoma News Tribune wrote in a recent editorial, “Jails and prisons have become our de facto mental institutions.”

Not only is that approach ineffective, it is also extremely expensive. It means local governments spend more for housing and court services and medication and treatment of the mentally ill while in their custody. For emergency rooms it means they fill up with mentally ill patients they are often ill equipped to deal with.

In Washington we have seen a dramatic rise in psychiatric boarding–or warehousing. Boarding happens when involuntarily committed patients must wait for hours in a hospital emergency room because psychiatric facilities have no open beds.

A recent investigation by the Seattle Times found that boarding has become routine in our State, “traumatizing thousands of mentally ill residents, wreaking havoc on hospitals, and wasting millions [in] taxpayer dollars.” Patients are “frequently parked in hallways or bound to beds, usually given medication but otherwise no psychiatric care.”

This report is the basis of why this legislation is so important. The report also talked about financial costs. Boarding costs Washington State’s health care system $10.5 million a year, according to the State.

I believe we can do better, and this legislation helps us do that. We can support proven models that improve efficiency and reduce spending. One such model is this legislation we just passed–community -based care that focuses on prevention, early intervention, and coordination between providers. All of that is why the legislation is so important. It helps increase efficiency while bolstering the community health centers with increased Medicaid support.

It will also enable the State to improve the quality and range of services. It requires the State to certify community mental health centers and meet higher standards. Some of those services would be things such as 24-hour crisis management, screening assessments and diagnosis, outpatient mental health substance abuse services, outpatient primary care screenings to monitor the indicators of health conditions, peer support and counseling, better coordination with veterans’ clinics, acute care hospitals, and inpatient psychiatric and substance abuse services.

All of these are missing in our communities, and oftentimes those individuals end up, as I just said, in either the emergency room of a hospital or in a jail. Currently, there are no standards for mental health services in community health facilities. States that will participate in this program will be able to get a Medicaid reimbursement equal to what federally qualified health centers receive for primary care services.

In Washington we have seen how some of these community-based services are paying off. In rural central Washington, the counties of Yakima, Kittitas, and Klickitat have reduced their hospitalization through strengthening outpatient services and investing in early intervention programs, such as community treatment teams that meet with patients in their homes.

This region in my State now has the lowest per capita psychiatric hospitalizations, according to an editorial in the Seattle Times just last week. This demonstration project builds on what we already know can be successes. Clearly, we have a lot of work to do, but this important legislation will help us be smarter about community-based care that will keep people out of the emergency rooms and out of our jails, keeping them from becoming the mental health clinics of last resort.

As Chris Imhoff, an official with the Washington State Department of Social and Health Services, remarked:

It’s exciting for a community when something like this happens. ….. It helps us not strand people with psychiatric emergencies in emergency rooms, which is a good thing.

That is why this legislation is taking us in the right direction. So again, I thank the Senators from Michigan and Missouri for their leadership on this legislation. It is so important we got it passed, and, hopefully, now it will move towards the President’s desk and implementation”, said Senator Cantwell.