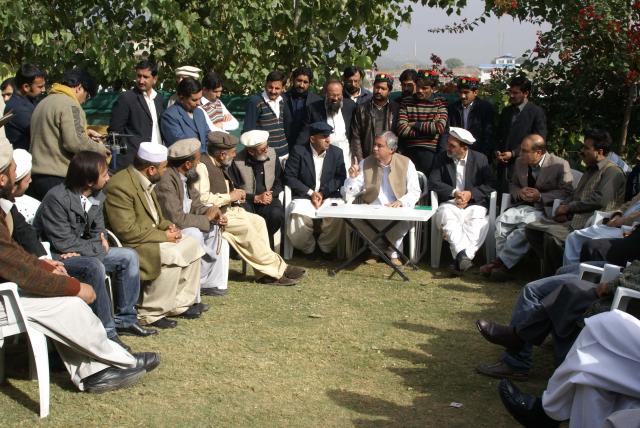 By Ishu{eye}.
As per the constitution of jammu andKashmir state during the session
1989 some communities in state were specified and decleared as
Scheduled Tribes among the spacified communities like Balti, Beda,
Bot, Bota and our community Dard/Shin was one and was enlisted in
serial no 4. During the session 1991 reservation rule was amended and
some more communities were specified as Schedule Tribe amoung which
Gujjar, Bakerwal, Community, was another and was enlisted as serial no
9. Right from 1989 all the specified communities are enjoying the
benifits of ST status with full honour and dignity but unfortunately
only Dard Shin Community resides in Kangan Tehsil of District
Ganderbal has been ignored and refused to provide the benifits of ST
Status by the competent authority for the reasons best known to them.
More than four thousand families of Dard Shin Tribe are residing in
Tehsil Kangan since 1975. The whole population of Sarbal Village
belong to Dard Shin community resides in this village since before the
partition of the country which means 60 years back. Another
significance is Prang village where some more families are residing
since 1966. The villages like Akhal, Gonchi Mohalla, Check, Nela
Nejwan, Tang chatar , Hayan, Kulan, Wussan, Mamar, Sarbal, Sonamarg
etc of Tehsil Kangan where most people are from Dard Shin community
and they all are being voilated from their rights. However some other
places the people of the same community like Natipora, Kralpora,
Bandipora, Gurez, Tulail, Moujigund, Drass, Rajouri, Chandarkot in
jummu who are fully enjoying the status. Central govt has given the
right that where ever the members of the Dard Shin tribe may reside,
they can get the status of ST under SRO 126 without the tehsil Kangan
every individual of the same tribe enjoys the right said Ab Rahman
lone of Gonchi Mohalla of Kangan tehsil. The poor, deprived and
helpless Dard Shin Community residing in Kangan area got the orders
from Hon;ble Lower and High court of Jammu and Kashmir with the clear
instructions to the Tehsildar Kangan for issuance of ST Certificate
and providing of all the benefits under reservation rules, but
unfortunately the orders issued by the Hon;ble court and higher
authorities are completely ignored by the Kangan Authority said a
local residant of Akhal Kangan from the Dard Shin community. By this
inhuman behavior and attitude of Adminstration the poor and help less
Dard Shin Community is completely demoralised and have lost all the
hopes for betterment of their future generation. As all the member’s
of Dard Shin Community residing in the different Tehsils of state of
Jammu And Kashmir are fully enjoying the status of Scheduled Tribe
with honour and dignity including Tehsil Ganderbal only the people of
Dard Shin Community residing in Tehsil Kanganare refused to provide
the benifits under ST status and the certificate is not issuf by the
Tehsil Kangan. A representation was made to the Hon;ble Chief Minister
of Jammu and Kashmir but he was also helpless in front of his cabinet
and nothing was done said a Dard Shin member of Gonchi Mohalla kangan
Mr Ghulam Mohd lone.
The case bearing OWP 448 of 2002 read with C.M.P No 74202 was also
decided in the favour of the Dard Shin Tribe on 21-09-2005 and in this
regard also the Social Welfare Department issued the circle in favour
of the Applicants of Dard Shin Tribe inhabitants of Tehsil Kangan. But
when the Applicants of Dardshin Community applied in Kangan Tehsil
they were refused and the poor people aggain approached the Hon;ble
High Court of J&K for redressed of their Grievence and the Hon;ble
High court further on 12-05-2010 under case no 3065/13/05/05/ 2010
decided in favour of the Applicants. A local residant of Sarbal
Village Juma lone of Dard Shin community told that"We have visited
every office of Jammu and Kashmir even we did not left any Minister
but every thing goes to vain, know from last 2years DC Ganderbal is
playing hide and seek with us. We did not know why the staus of this
down trodden communiy is being voilated by some unknown political
reasons". A youth of Dard Shin community from Kangan{name with
held}said that"we request once again to the authorities that please
see the matter so that our ill fated community should be pull out from
this mud of vicious poverty by best owing us our basic rights given by
the law. If govt fails to give us our right we may came on roads and
Adminstration will be responssible for any cause".
Demanding immediate attention of the Government, the DardShin
community said"we are disappointed with the state as well as the
district adminstration as they emezzle crores of rupees in the name of
development of Tribes. If the Government continues to ignore us we
will flee back to our mother land in the other Kashmir

Promises of J&K (Indian) government:- ST order 1989 by the President
of India issued wide notification no G.S.R 882{E}on 7th oct 1989 in
Kashmir under S.R.O 129 date 26.06.1994. But the Shina community did
not received any helpfrom Government. The people of Gurez, Tulail
specially Shina community state migrated from Tulail, Gurez,because of
natural wide problems such as floods, fire, uncomfortable life,
avalanches, electricity,Kar gil war in 2002 year and the Kishanganga
Hydal power project which forced us to leave our mother land and our
ancester’s . At present The Shina community is facing their status
problems in Tehsil Kangan of Jammu and Kashmir.The government is not
providing them their Scheduled tribe status (ST)due to some unknown
political reasons.The J&K Indian government is sleeping.The Shina
community demands to get their ST status back."The honorable high
court has given the orders in favour of Shina community, but
unfortunately the administration of Ganderbal and some unknown
politicians are violating our rights"said a dard shin Ab Aziz lone.

With tears in eyes Lone added that"people were forcebly migrated from
Tulail and they are being cheated, why this happens only with the poor
people of kangan tehsil, we lost and left every thing their and even
we could not build our houses here because of advance and
modernization of other people but we try to save our selves by daily
work. We earn some money in whole day and fullfill our basic needs
because we not much land for cultivation. We request our central govt
if you can’t give the banefits then you should not make promises. He
added.