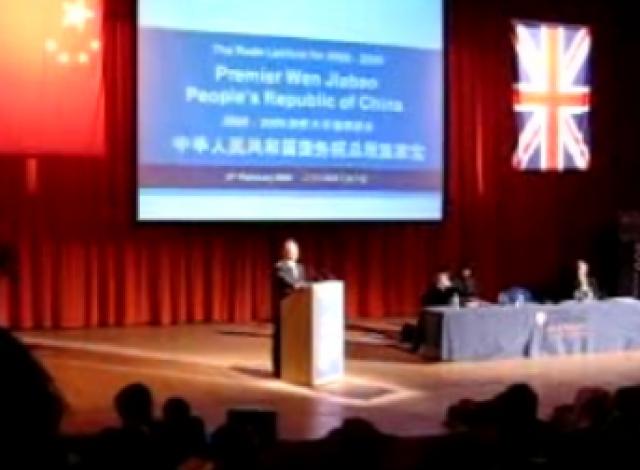 Shoes thrown at a leader, but not G.W Bush this time

Chinese Premier Wen Jiabao was greeted by a shoe thrown at him during his speech in Cambridge University, England. The lecture was about building harmonic international relations.

The protester hurled a shoe at Wen, yelling, “How can the university prostitute itself with this dictator? How can you listen to these lies?” He then blew the whistle, and was shortly removed by security. The London Times described him as a “young, Western-looking man with dark hair”, a possible pro-Tibet or human rights activist.

Wen came back to his lecture soon, commenting on what happened: “this despicable behavior cannot stand in the way of friendship between China and the U.K.”

Wen’s speech in Cambridge is one part of his 5-day European visit. The trip is considered an effort to repair the relationship with Europe which was damaged by Tibet riots and protests during the Olympic torch relays. On the other hand, with a stable and strong, though slightly slowed economic growth, China is trying to exert its influence and signal friendship in a time of global financial crisis.

Wen’s lecture is also a call against protectionism, which may greatly undermine China’s export-oriented economy. Wen has criticized the U.S and some enterprises for the cause of the crisis, blaming them as irresponsible and immoral.

France is not on the Wen’s visit schedule. Nicolas Sarkozy, the French president, met with the Dalai Lama last year, which was considered a particularly unfriendly action by Chinese.

Protests accompanied Wen during his visit, most of them concerning issues about Tibet.

Pissed off by the shoe

Unlike the way many Americans reacted to their former president Mr. Bush’s embarrassment in Iraq, it seems that this time the shoe thrown to Wen has really pissed off a great many people.

In Xiaonei, the Chinese copy of facebook, a post named “Britain, do you still wanna play?” showed up shortly after the incident. It aggregates a few furious comments.

F–k Tibet-separatists, I’d go fighting with you jerks if I had known I had no class today. Let’s see who has more shoes. Don’t ever forget that the shoes that flew at Bush are both made in China.

In DWnews, an independent media publication, someone, obviously reminded of Bush, commented:

And another netizen followed:

Call for human flesh search engine, find the man out!

On Youtube, the video gathered a group of comments written in both English and Chinese.

Even so benign an old man was thrown by a shoe. The guy in Cambridge has his brain going wrong?

Shame on this jerk. And it’s such an ugly shame the Cambridge lecture hall is as sacred as a Baghdad tent.

Answer to your question – Cambridge Uni invited the Chinese PM.
Such a shame though – one student threw a shoe at the speaker just becoz he has a different political view, and the respect the entire world has for Cambridge Uni just came tumbling down.

siuhuen, inviting Wen Jiabao to this university already lowered it s respect, come on CCP is known for it s genocide tendencies. Wen Jiabao and Hu Jintao are both responsible for crimes against Humanity in China and Tibet (if you believe is not part of China). So Campbridge lost all it s honor already!

And in Xiaonei, not everyone is so much indignant. User å¼ èƒœè“ commented on the news:

So only can Bush be thrown with shoes? And when it’s Wen’s turn, we turn out to be so furious?

And Wen’s reply to the incident is all too official. Even clap for this? I doubt who are those in Cambridge.

Regardless of how the internet and overseas media react to the shoe, however, the state-media covered up the news determinedly. In discussion boards and blog servers, also, nothing related to the incident can be found. It seems as if the shoe has never been thrown in this harmonic world.

This article was originally published on Global Voices Online.