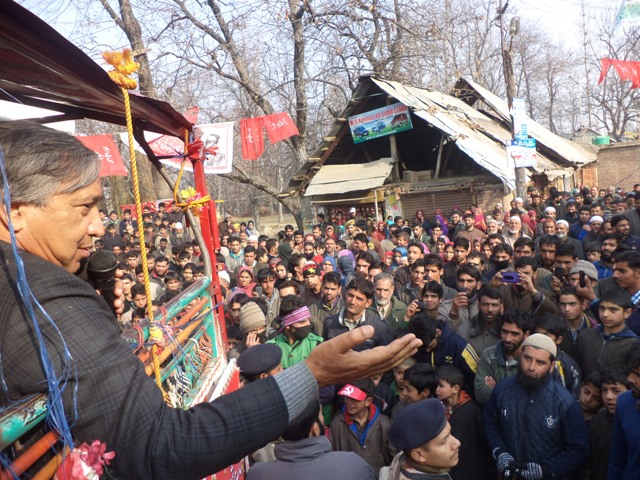 Wachi ,December 04, (Scoop News)-Stating that the people of the entire district Shopian are suffering for want of basic amenities in socio-economic development, infrastructure building and technology, State Secretary CPI (M) Mohd Yousuf Tarigami today said that the area has been neglected in every aspect.

While addressing various election rallies in villages Rai Kapran, Pondshan,Poshhama, Gadipora, Adijan, Kanjiullar, Mantujan, Pudsoo, Pheripora and Batagund of Wachi Constituency, Tarigami said that entire district Shopian has been neglected in the field of development by the successive governments. The major political parties only remember the people during the elections and make tall claims to redress the public problems which later on mismatch these claims. Wachi constituency, the fruit belt of the district has been all together ignored in respect of development of road infrastructure, electricity, water facility as a result of which the people of the area have been facing acute hardships. Tarigami said that Shopian being a prominent fruit zone of the valley fetches maximum income to the state through export of fruits so there is an urgent need for introducing modern horticulture and agriculture-related infrastructure in the district. It is the time, the people of the constituency should rise above the pity considerations and vote decisively in favour of for Zahoor Ahmad Rather, CPI(M) candidate for the Wachi constituency.

In his address CPI (M) contesting candidate Zahoor Ahmad Rather said that most of the areas of Shopian district were neglected by the successive governments.” He assured the electorate that he will leave no stone unturned for the development of the area.