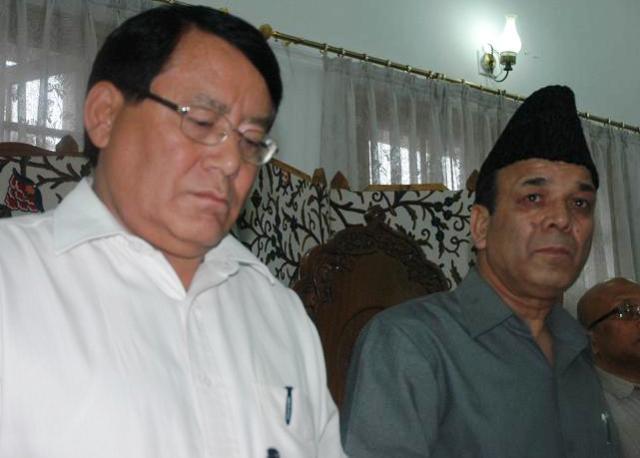 ,July 10 – Jammu and Kashmir Minister for Finance, Law and Parliamentary Affairs Abdul Rahim Rather addressed a crowded press conference in on Friday evening. He said on 30.05.2009, the dead bodies of Mst. Neelofar Jan w/o Shakeel Ahmad Ahanger s/o Abdul Gani r/o Bongam, Shopian aged 22 years and her sister in law Miss Asiya Jan d/o Abdul Gani Ahanger, aged 17 years who had been reported missing the previous day, were recovered from the Ranbi Ara Nallah in Shopian. Given the general public dissatisfaction with the manner in which the investigation into the deaths was being carried out, the Government set up a Commission of Inquiry headed by the Justice (Retd) Muzaffar Jan under the J&K Commission of Inquiry Act, 1962 to inquire into the causes and circumstances of the deaths of the two women with the following terms of reference:-

i.                     enquire into the causes and circumstances which led to the death of  Mst. Neelofar Jan and Miss Asiya Jan on the intervening night of 29th and 30th of May, 2009 at Bongam, Shopian and recovery of their dead bodies from Ranbi Ara Nallah, Shopian;

ii.                   ascertain whether there has been any foul play in their death and if so, identify the person/persons responsible;

v.                   ascertain whether there was any failure on the part of any Department in the government in the conduct of an investigation or handling of the post incident situation.

The Law Minister said in terms of the recommendations of the Commission, Shri Javed Iqbal Matoo, SP, Shri Rohit Baskotra, Dy SP, Shri Shafiq Ahmad, Inspector, Shri Gazi Abdul Karim, SI, and Shri Javed Iqbal Hafiz, Scientific Officer, FSL have been placed under suspension and disciplinary action has been initiated against them. Disciplinary action has also been initiated against Dr. Bilal Ahmad and Dr. Nighat Shaheen, as recommended by the Commission.

Mr. Rather said the Hon’ble High Court of has also issued the following directions regarding the investigation of the case:-

3. Farooq Ahmad, IGP. CID appointed as an Enquiry Officer in relation to contemplated disciplinary proceedings against the suspended Police Officers to be replaced by some other Officer who wil1 conduct the enquiry;

4.         Report from the Forensic Science Laboratory, be expedited;

7.         Suspended Police personnel shall be interrogated by the Special Investigation Team and if necessary followed by Narco analysis test, permission for which is granted;

8.         Two gentlemen whose statement have been recorded under section I64-A of Cr.P.C stating therein that around 8:00 PM on May 29, 2009 they saw a blue coloured 407-TATA Police vehicle near the bridge in proximity of the place from where one of the dead bodies was recovered and they heard cries in female voice to be interrogated and if necessary Narco analysis test of these gentlemen be conducted, permission for which is granted;

9.         Hair and blood stain samples seized by the Special Investigation Team during the investigation to be sent for DNA test along with the blood sample of one of the victims for matching the same;

I0.        Nomads who were camping in close vicinity of the place from where one of the dead bodies was recovered to be searched and to draw up an appropriate picture of those nomads and to circulate the same so as to locate them;

12.       Mobile calls to be traced and a direction is issued to the service providers to extend full co-operation to the Special Investigation Team in locating the calls.

Mr. Rather said the aforesaid directions are being implemented by the Government in letter and spirit. He said the Commission finally submitted its report on 7.7.2009 with the following findings:-

"The Commission, being aware of its delicate duty to uphold the majesty of law, has also a duty to identify the person or persons, who may, under law, be responsible for the present ruthless crime.

To identify the real culprit, extensive investigation, by a competent and dedicated team of professional investigators, with all modern facilities, is required. However, the intensive investigation is bound to take some more time. The Commission with lime constraint of a few days more, and limitations to confine its report to the specific points under reference, thereby restricting the jurisdiction of the investigation, the Commission cannot undertake detailed investigation, which may require raids, search, arrest, detention for sustained. Interrogation of number of persons suspected of the commission of the crime.

Although conclusive evidence to identify the culprit, has not been furnished before the Commission because of unfortunate obstructions caused by local residents and large section of society, encouraged by some dissenting elements, in the working of the Commission, yet there is material on the file to hold, that the involvement of some agency of the J&K Police, in the present incident, cannot be completely ruled out."

Mr. Rather said  in pursuance of the findings/recommendations of the Commission, the Government has decided that the four Police personnel, already under suspension, are to be arrayed as accused in the FIR. No. 112/09 dated 6.6.2009 registered with the Police Station Shopian insofar as their role in the destruction, dissipation and suppression of evidence is concerned. He said a case will also be registered against Shri Javed Iqbal Matoo, the then SP for giving false’ evidence before the Commission. The SIT will conduct further investigations in the case in accordance with the law and in terms of the directions of the Hon’ble High Court of Jammu and .