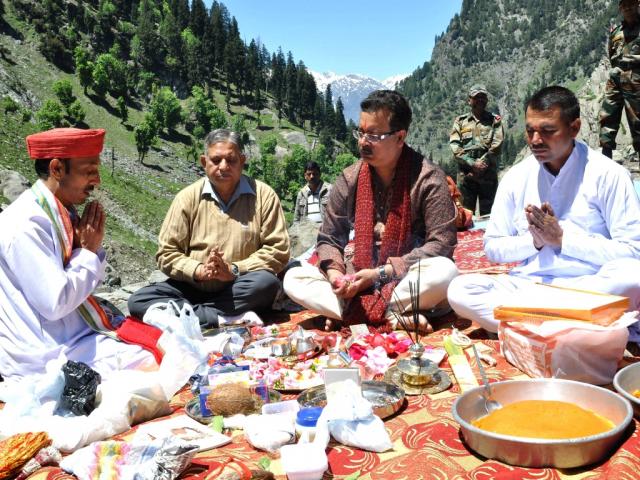 Srinagar, June 04 (Scoop News) –To invoke the blessings of Shri Amarnathji for the smooth conduct of ensuing Yatra to the Holy Cave Shrine,  Navin K. Choudhary, Chief Executive Officer of the Shri Amarnathji Shrine Board, today performed Pooja on the auspicious occasion of Jyesht Purnima at Chandanwari, on the traditional Pahalgam-Holy Cave track, amidst chanting of Vedic Mantras.

Interacting with the media persons after performing the Pooja, the CEO said that, in view of the significant disruption of work caused by continuing bad weather, on the directions of  N. N. Vohra, Governor and Chairman of the Shrine Board, additional manpower has been deployed for clearance of tracks of snows and putting in place all other Yatra-related arrangements at the Base Camps, Camps enroute and in the Holy Cave area well before the commencement of the Yatra on 25th June. He said that large accumulation of snows on the tracks and at the various Camp locations, alongside continuing bad weather, had seriously hampered the pace of clearance of tracks and positioning other arrangements on ground. It is hoped that, with the deployment of additional manpower, the required arrangements will be timely in place. For this purpose, the engineers and other staff of the Board, Government Departments and all the concerned agencies are working on war footing, he added.

Zahid Malik, Additional SP, Anantnag,  B. D. Mengi, Camp Director, Holy Cave, media persons, officials of the Shrine Board, Police and Army personnel were among those present on the occasion.

Later, the CEO reviewed the work on the construction of Entry Gate, toilets and Shelter at Chandanwari. At Nunwan Base Camp, he inspected the pace of work on the repair of toilets, baths, restoration of water and power supplies, laying of paths, repair of drains and Sewage Treatment Plant besides other arrangements, which are going on full swing.