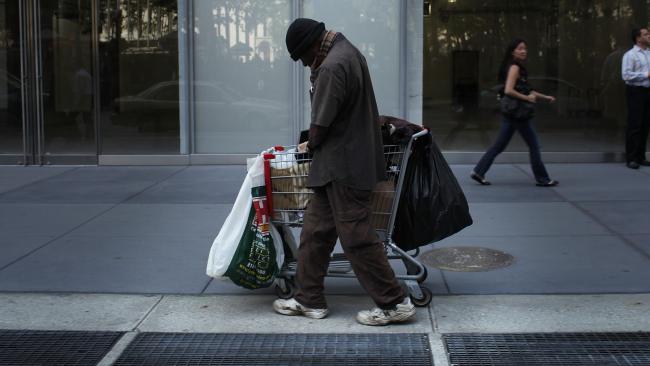 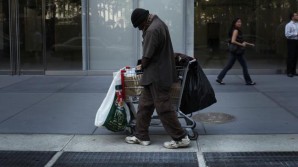 Homeless, unemployed “mentally ill” black man in the state of Maryland walks down the street with everything he owns in a grocery cart.

On October 31, 2013 (Halloween) Senator Ben Cardin of Maryland asked for and was granted permission to address the United States Senate regarding the huge cost associated with the government shutdown.

“Madam President, this afternoon I joined with Senator Warner and Senator Klobuchar and Senator Casey to point out just how much harm is caused to this country because we are governing from one manufactured crisis to another. The cost of the government shutdown, the cost of coming so close to defaulting on our obligations, the fact that we are governing through automatic across-the-board cuts known as sequestration, is hurting our economy.”

“This has been particularly difficult for the people in the State of Maryland, the State I represent. In our region we have so many Federal workers, so many Federal facilities–10 percent of our workforce works for the Federal Government–that we saw many small businesses in our communities that depend upon the Federal workforce literally having nobody in their restaurants and in their shops. Consumer confidence was at an alltime low. There have been estimates as to the amount of harm caused by the government shutdown. Standard & Poor’s said $24 billion was taken out of our economy as a result of the government shutdown. Add that to the extra cost because we came so close to defaulting on the debt. Add that to the fact that since 2011 we have been living under sequestration. The estimate is we have lost about 900,000 jobs from this self-inflicted crisis management”, said Senator Cardin (source: Congressional Record http://thomas.loc.gov).

Senator Cardin currently serve on the following committees and subcommittees:

Filed under: News, Politics
Share Tweet Pin G Plus Email
previous article: BJP committed for removal of refugee tag :Khanna
next article: “The estimate is we have lost about 900,000 jobs from this self-inflicted crisis management”, said Senator Cardin