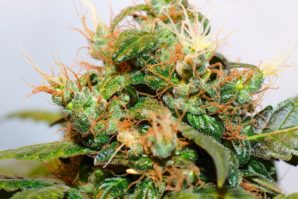 Calling cannabis “weed” isn’t popular with many enthusiasts of the flower, but it’s also something many can relate to. Weed, pot, grass—medicine? There’s a revolution in America right now. The pot leaf has been let out of the bag, and it’s not going back in.

Currently recreational marijuana is legal in Colorado, Washington, Oregon, California, Alaska, Maine, Massachusetts, Nevada, and the District of Columbia. More than half of the US has cannabis legal in one form or another; whether it be recreational or some medical application. It’s easy to imagine that in the next ten years, it will be recreationally legal nationwide.

That green genie has been let out of the bottle. Now it’s time to make a wish! And one of the smartest wishes you can make is for business acumen in growing this exceptionally valuable cash crop. Weed-i-con valley: it’s a play on the term “silicon valley”, and for good reason. Cannabis stands to make a lot of people very rich very quickly.

When eight states have recreational pot use legally allowed, there is going to be a market. Colorado has seen marijuana immigrants from across the country flood its borders looking for a taste of recreational marijuana. There’s a term in Northern California which describes those who work in the industry as “trimmigrants”, because they trim weed for a living and travel.

States where marijuana is recreationally legal are seeing high quotients of increased tourism. This marijuana trend is flowering, and it has not yet reached its fullest bloom. But it will, and likely very soon. For this reason, many thousands of entrepreneurs across the nation are quickly getting involved with this burgeoning trend. But getting involved does incorporate some complications.

According to ThinkCanna.com, obtaining a cannabis business license can be a little more involved than expected because, “Due to the newness of the industry, the regulations and laws surrounding it are always changing.” Here’s the thing: before over-regulation curtails the highest possible profits, it makes sense to get involved for maximized ROI.

Already there is a corporate putsch for superiority in the American cannabis industry. If you haven’t yet been to a state where marijuana is allowed legally, it makes sense to make a slight pilgrimage and see what’s offered. You’ll encounter cannabis stores that seem like some corporate medical office, and those that look like they sprang up overnight in a garage.

There is quite a bit of variety, and quite a bit of success. When recreational marijuana became legal in Colorado in the wake of the 2012 presidential election, there were literally lines that were a block long or longer. Averaging $20 per person in such a line, and fifty people being processed per hour, a shop opened ten hours a day, seven days a week, turns $70k in profit.

That’s $280k a month, or $3.36 million per year, and that only in one shop. Now those numbers are conservative. The preponderance of customers will buy more than $20 worth of merchandise per visit. Granted, fifty per hour may be a high processing rate; but there are plenty of outlets where that’s actually quite low.

People are getting in while the getting is good. Even a relatively small grow operation can make real money very quickly. Getting in now will allow enough of a profit margin to provide increased success before later regulations likely come. The field has been tilled, and there are many planting seeds—but research before you start so you’re entirely compliant from a legal perspective.