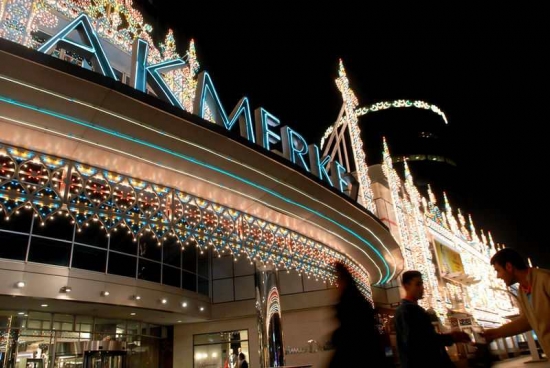 A gander down the high streets through this European city in December has all the festive spirit of an American suburban shopping mall. The light posts are covered in garland and holly. Santa Claus in his rotund, velveteen splendor makes his usual appearance in storefront windows. Pine trees bedecked with shimmering bulbs and twinkling lights adorn the loft apartments a few floors above. In the stores, the usual cacophony of seasonal programming blares through the PA system: the forays of former Beatles members into the Yuletide musical genre, Bette Midler singing “Jingle Bells” revved up to 140 beats per minute, and the poppy strains of Mariah Carey. Down the street, baristas placate the caffeine-starved with gingerbread lattÃ©s.

Yet unlike any stateside sprawling centre of consumerism bounded by a tangled mass of interstate highways, this particular city has a Muslim majority. This city is Istanbul, and this “most wonderful time of the year” is the decidedly secular New Year’s.

Rewind some 20 years back to the Turgut Ã–zal era. Years of national in-fighting between left- and right-wingers eventually led up to in a 1980 military coup under
chief of staff Kenan Evren, under whose military government he served as deputy prime minister in charge of economic affairs under Evren’s military government, Ã–zal became head of his newly founded Anavatan (Motherland) Party, which won the 1983 elections. From then until his fatal heart attack in 1993, the country was hitting its stride on the path to economic liberalization during his term as prime minister and later as president.

Ã–zal was a country son who made good. Born and raised in southeastern and central Anatolia, he was trained as an electrical engineer and worked in that field until 1963, when he did his compulsory military service. He then did a lectureship at Ankara‘s Middle East Technical University, after which he was at the World Bank from 1971-73. It was during this time that he began to embrace the ideals of free-market economics. Upon becoming prime minister in 1983, he set on instituting a host of fiscal and monetary reforms that opened the country to a wave of privatization, capital raising and new consumer goods from abroad, as well as a fresh dose of Westernization.

The country got its first breath of telecast freedom in 1986 with the launch of TRT 2, a partner channel to the long-standing TRT, the national broadcaster. TRT 3 followed suit in 1989 and the first private channel, Magixbox, now known as Star, was launched in 1992. The airwaves ushered in images of the world that was opening up to them-both economically and culturally. The mantra of the burgeoning urban middle class soon became: foreign, Western, good. Supermarkets began popping up as an alternative to the local bakkal, or corner grocery store. Barbie dolls and G.I. Joes began to populate store shelves. And when to give these toys to the little ones?

The urban and upper and middle classes, largely secular in mindset, embraced the Christmas traditions streaming into television sets with all of the gusto now seen in the country on seasonal specials of “Charles in Charge” and “Moonlighting”. Yet lacking an understanding of on what day Christian holidays fall- much less a desire to take up Christianity-those with new-found wealth adopted the elements of American-style Christmases, making New Year’s the religion-free day of feasting, imbibing of spirits and gift exchanges.

Into the 2000s, and shopping malls are full of harrowed mothers and anxious children waiting their turn to sit for a photo with Noel Baba. “A New Year’s Story” (translated from the 1983 American classic “A Christmas Story”) makes its rounds on the programming schedule on satellite service provider Digiturk. School children are taught that decorated pine trees signify the coming of a new year. Many Turks remain unaware that Christmas and New Year’s fall on separate days, and good naturedly say “Merry Christmas” to foreigners on December 31 and January 1. Last year on Istiklal Caddesi, a busy pedestrian avenue in the center of Istanbul, the lights and garland were not even strung up until December 26.

The country’s Islamists on the other hand, see this import of traditions as another Western attempt to destroy the moral fiber of the country, and decry this perceived turn towards self-indulgence and consumerism. Indeed, a quick glance from the outside of the Istanbul shopping mall with alleged Islamist links shows no discernible signs of tinsel and fake snow. Kerem BalcÄ±, a member of the Islamist political party Saadet (Happiness) that was responsible for organizing the largest protest before the November 2006 visit of Pope Benedict, ran an opinion piece in the local press on how “Christmas should be sacrificed”.

The faithful conservatives have thus begun to throw their own libation-free New Year’s affairs. One celebration of sorts held last year in the city of Konya, the home of Rumi and his Mevlana Sufi order (better known in the West as the “whirling dervishes”) had a large-screen projection with the words (translated from Turkish) “To where is this entry?” and an imam reading the Koran when the clock struck midnight.

Further complicating matters this year is New Year’s coinciding with the Feast of the Sacrifice, the bigger of the two major Muslim religious festivals. Some moderately religious Turks may be praying in the morning, yet drinking cocktails come nightfall.

Yet the spirit of the holiday-whatever its label–is imminent throughout Istanbul. The two faces of December 31 this year are perhaps a sign of the greater frenetic search for identity pervading the country, and along with the rest of Ã–zal’s legacy, part of what shapes Turkey’s character in the 21st century.

Filed under: Politics
Share Tweet Pin G Plus Email
previous article: The US and Asia are not the only places that get Tornados
next article: The patients of a saint