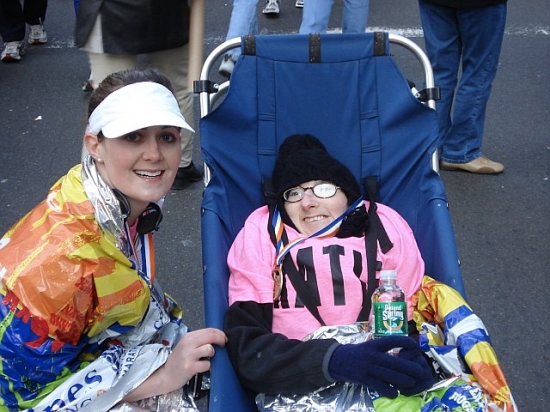 By all appearances, Hillary Beeman is your average 23-year-old, living it up in New York City. The Boise, Idaho native has an irrepressibly cheery demeanor not often seen in these parts, and she can disarm even the grumpiest urbanites with her midwestern charm. A regular at some of Manhattan poshest night spots, Ms. Beeman has been known to smile her way past impossible velvet ropes and dance until the wee hours.

But as Hillary’s friends will tell you, appearances can be deceiving. A financial analyst in New York City, she has risen quickly on the corporate ladder, enthusiastically putting in 14-hour days at a job she loves. And Hillary still manages to run up to eight miles a day, attend philanthropic events all over the city and maintain her vibrant social life. In light of her can-do persona, Hillary’s friends weren’t surprised when she announced her intention to run the New York City marathon.

But they would be soon.

A group of pals assembled on Sunday afternoon in Central Park to cheer her on, stationing themselves according to where Miss Beeman was meant to be around 2pm. When she was a few minutes behind, they grew a little concerned that they might have missed her–or worse, that she’d been injured. The least worrying conclusion was that perhaps she was just a little behind; it was, after all, her first marathon.

But the real reason became quite clear when the girl in the pink "HILLY" t-shirt sailed by–and she wasn’t alone. "Who is she running with?" everyone asked each other as Hillary ran by out of earshot, pushing a navy blue jogger stroller. It was her sister Katherine, who is as socially vivacious as Hillary but because of a neuromuscular condition couldn’t have run the marathon without her help. Hillary pushed Katherine, who is 25, through the last 10 kilometers of the grueling race.

At the marathon’s conclusion both girls were as fresh as daisies, and glowing from their achievement. Hillary called the marathon "the best show of New Yorkers I’ve ever seen," and praised her fellow runners, some of whom offered to push Katherine midstream.

Katherine, who took charge of motivational activities during the race by waving to cheering spectators and generally having a good time, also received a medal and customary space blanket at the finish line. Katherine–also known as Katie–continued to glow throughout the evening, recounting her feat to family members. (To which some replied, "…and Hillary? Didn’t you show up at the end or something?")

Which brings us back to Hillary. She was back at work the next day, and has already signed up for the Paris marathon in April. And next year, she’s planning on running with Katherine again–the whole way.

All ad revenues from the viewing of this article will go to Boundless Playgrounds. Thank you and share it with friends!