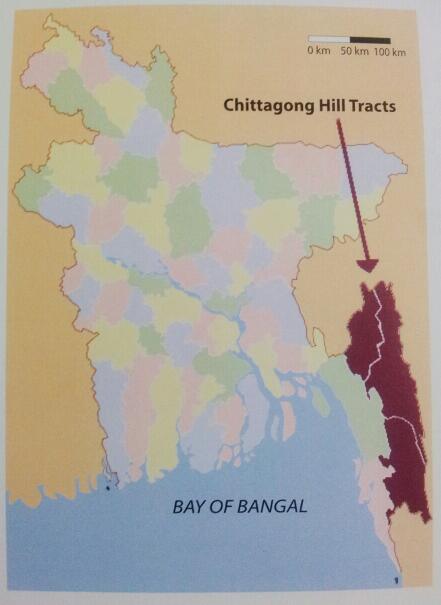 Recent developments in the apparently isolated Chittagong Hill Tracts and the environment which was supposed to prevail in the adivasi region in line with the 1997 Peace Accord appear to contradict at a larger extent nowadays, more than any time in the past.

In a nutshell, the ruling Awami League, which signed the much-desired Accord with Shanti Bahini, now Parbatya Chattagram Jana Samhati Samiti (PCJSS) to end a decade-long armed struggle, claims that the process of implementing the provisions of the Accord has been running smoothly while the other party blames the government for not being sincere in keeping its word as they see no sign.

Based on such claims, the PCJSS, led by Jyotirindra Bodhipriya Larma alias Santu Larma has threatened to wage non-cooperation movement from May 1 if the government fails to chalk out a roadmap to materialise the provisions by this time. The group has also been campaigning since November to drum up support from like-minded groups and individuals. Its leaders say they will remain prepared for any adverse situation.

On the other hand, the government did not hesitate to rudely put fresh restrictions on the indigenous people, their political parties and groups, and the local and international organisations working in the CHT on different issues – from basic rights to legal assistance.

Moreover, the government has ordered crackdown on members of indigenous groups responsible for possessing illegal arms and extortion. These acts clearly reflect that people who want to implement the Accord cannot make such decisions under any circumstances.

Following the declaration of Santu Larma in November, the adivasi groups active in the CHT, Dhaka and other countries have intensified campaigns on the long-pending disputed issues – ranging from grabbing and acquisition of land to persecution of women.

In some cases, groups which earlier maintained distance among each other have begun to work together. The United People’s Democratic Front (UPDF known as an anti-Accord group), in particular, has vowed to support the upcoming hard-line movement of the PCJSS though they were believed to be arch-rivals earlier.

The ruling Awami League-led alliance government at this moment of possible confrontation has strongly been supported by its allies, the law enforcement agencies and the armed forces, and the highly-privileged local Bangalis having affiliation with ruling party, BNP and Jamaat-e-Islami to not giving the indigenous people breathing space. Security forces and several ministries recently expressed concerns over the rise of threats from adivasi groups.

Such a conflicting state of affairs has not been a bolt from the blue.

Mistrust and practice of means to deceive others are to be blamed for the current situation.Opposing the Accord, the previous BNP-Jamaat-led government did almost nothing to implement its provisions after the Awami League left office in 2001.

The incumbent government since 2009 implemented a number of sections of the Accord but the key issues – resolving land disputes, withdrawal of army camps and transfer of some divisions and departments – have remained unfulfilled. Even though the government claims that they have executed most of the 72 sections of the Accord, the PCJSS terms it sheer lie mentioning that only 25 have been implemented.

The incumbent government drew massive criticisms first in 2011 by not recognising the hill people as adivasis or indigenous people during the Fifteenth Amendment and thus refusing to adopt international obligations to ensure the rights of the indigenous people.

The functioning of the Land Dispute Resolution Commission was also criticised at that time since its chief started working with an aim to resolving cases without the participation of the indigenous representatives and bypassing the directives mentioned in the Accord. Finally, the government was compelled to suspend the commission’s activities and initiate amendment to the related law.

On the other hand, since no election has yet taken place in the last 22 years to the three hill district councils, those local government bodies are now run by people appointed by the government on ad-hoc basis.

Land dispute is the most important issue to be addressed first; but despite settling a single land-related case, the government and Bangalis in the CHT, ironically, have already created thousands of new complications – for instance, by acquiring and grabbing at least 3,900 acres of land owned by the adivasis last year alone. Moreover, another 84,647 acres are in the process of being acquired and occupied, according to a report of Kapaeeng Foundation, a rights body.

Meanwhile, well-planned attacks are being carried out on the indigenous people’s land, houses and businesses, and women and children so that they leave their land voluntarily.

The Bangali settlers behind such attacks usually remain out of the radar of the law enforcers due to a longstanding culture of impunity awarded to them by subsequent governments. Last year, the number of such attacks increased sharply creating a frightening situation for the adivasis.

The mindsets, acts and future plans of both the government and the adivasi community leaders have now created a terrifying situation not only among people in the hills but also those peace-lovers at any part. Both the parties, especially the government’s policymakers, would exercise restraint and follow the country’s constitution and the landmark Accord to establish peace in the CHT region as pledged 17 years ago.

Published in Dhaka Tribune on March 19.

Tension in CHT may escalate due to mistrust

Implement accord to end CHT land-grabbing