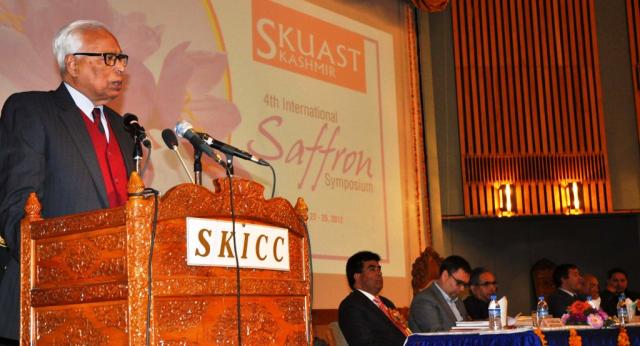 Srinagar, October 22(Scoop News) –    N. N. Vohra, Governor Jammu and Kashmir, today emphasized the need for taking all required measures in a time bound manner for enhancing value addition in agriculture, horticulture and allied sectors for maximizing economic gains to the growers in the State.             The Governor, as Chief Guest, was inaugurating a 4-day 4th International Saffron Symposium on “Advances in Saffron Biology, Technology and Trade”, at SKICC here today. This Symposium in which researchers, policy makers, traders and growers from various saffron producing countries are taking part has been organized by the Sher-e-Kashmir University of Agricultural Sciences and Technology-Kashmir (SKUAST-K), in collaboration with the International Society for Horticulture Science (ISHS), Belgium.

The Governor, who is Chancellor of the University, observed that saffron is world’s number one culinary spice and perhaps the costliest one. He added that recent researches have shown that it also has tremendous medicinal values and hoped that focussed researches would be undertaken in the country to further improve upon the headway made in the efficacy of saffron’s medicinal properties.

The Governor observed that is the second largest producer of saffron in the world and the State of has the distinction of producing this culinary spice. He said that whatever is required to be done to boost saffron production must be accomplished speedily so that saffron productivity and production is enhanced in the State. He added that there is urgent need for timely availability of quality corms, irrigation facilities, bringing more areas under saffron cultivation, quality control, marketing arrangements etc to secure the envisaged outcomes. He observed that there is a large gap between the supply and demand for saffron worldwide and this scenario calls for continuous endeavours to increase its production.

Referring to the 4th International Saffron Symposium, the Governor said that it has provided a very profitable opportunity to discuss saffron biology, technology, trade and other aspects of saffron cultivation. He complimented Dr. Tej Partap, Vice Chancellor, SKUAST-K and the International Society for Horticulture Science, , for organizing this Symposium and wished fruitful deliberations to the participants. He hoped that the scientists and researchers would deliberate on the obtaining constraints in saffron production, identify areas for enlarging collaborative researches and determine meaningful approaches for promoting trade.

The Governor released a Souvenir brought out by the SKUAST-K on this occasion. A number of other publications were also released at the inaugural session of the Symposium.

Ghulam Hassan Mir, Minister for Agriculture, said that saffron occupies an important place in the agricultural scenario of our State which is world famous for producing best quality saffron. He said that in J&K saffron is cultivated in the districts of Pulwama, Budgam, and Kishtwar. He referred to the measures which have been taken for the revival of saffron sector in the State. He also dwelt on the National Mission on Saffron which was initiated in 2010 for promoting the production and productivity, trade etc. of saffron.

Javed Ahmad Dar, Minister of State for Horticulture and Agriculture, hoped that this Symposium would act as a catalyst for enhancing productivity and production of saffron thereby promoting the economic welfare of the growers. He observed that the use of improved technologies and enhanced market linkages would help in securing the cherished goals in saffron sector.

Sanjeev Chopra, Joint Secretary, Agriculture and Mission Director, National Horticulture Mission, Government of India, said that high value agri and horticulture produce, including saffron, are an important contributors to the agri-GDP. He spoke about the National Saffron Mission and said that entire domain of saffron is being covered under this in the State.

Dr. Tej Partap, Vice Chancellor, SKUAST-K, in his address, gave a global scenario of the cultivation of saffron as well as relevant technologies and the status of its trade. He dwelt on the measures required for making available required technologies and providing improved planting material to the growers for maximizing production of saffron which has been a high value crop for the farmers since ages. He gave details of the strides made by SKUAST-K, in this direction.

Dr. Manual Carmona, , , a representative of the International Society for Horticulture Science, , gave details of the establishment, evolution, history, growth and activities of ISHS. He added that the organization has been devoting its attention on agriculture research to promote welfare of the growers.

Earlier, in his welcome address, Dr. Shafiq Ahmad Wani, Director Research, SKUAST-K, dwelt on the topics to be deliberated during the technical sessions.

Dr. F. A Nehvi, Organizing Secretary of the Symposium, presented a Vote of Thanks.