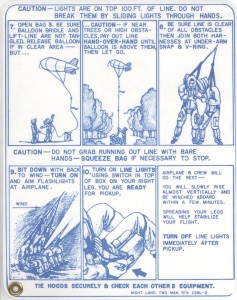 I periodically get notifications sometimes from the CIA on their Facebook page. To those who may find that strange, be aware that the CIA has its own Facebook page.

In this particular case it was historical stuff, dealing with innovative “extraction” (and insertion) techniques used by special forces, spies and agents during the cold war (1950s).

Interestingly it confirmed what many of us had suspected already but dared not ask. Namely that the skyhook concept , popularized by such movies as Batman – the Dark Night and James Bond in Thunderball had its basis in historical fact, and was at least once used by the CIA to extract spies in the field.

From the air-dropped package, the officer on the ground used a helium balloon to lift a 500-foot cable into the air.
Then he would strap himself to a harness connected to the other end of the cable, and sit with the wind to his back and arms crossed.

A low-flying, slow-moving plane, such as a B-17, would snag the cable with the Skyhook device on its nose, sweeping the person off the ground.

The plane’s crew then pulled the officer aboard the aircraft within a matter of minutes.”

Note that the Skyhook instruction card urges users to “act carefully rather than quickly” because their safety (lives) depended on it.
Skyhook was first used operationally to extract CIA officers and materials from an abandoned Soviet ice station. Read about it here: http://1.usa.gov/1pWkdkJ