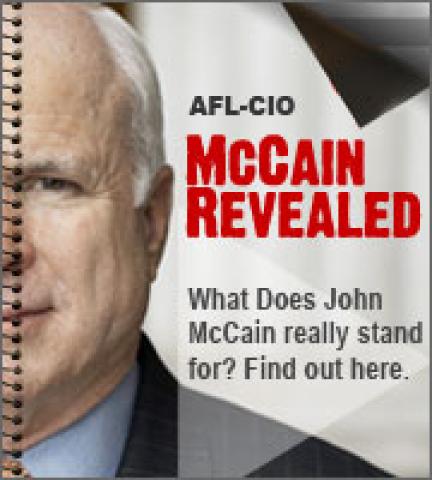 The biggest parlor game among journalists and politicos this summer has been guessing who the presidential candidates will pick as their running mates. Fred Smith emerged as one possible running mate, a selection floated by Sen. John McCain’s campaign that reveals McCain’s disturbing disregard for workers.

Marc Ambinder, a political journalist, reported that McCain campaign sources have been dropping Smith’s name for a potential role in a McCain administration—possibly even McCain’s running mate.

Smith is the CEO of FedEx and a notorious opponent of workers’ freedom to form unions and bargain. He’s an expert at using loopholes in federal law to block workers from forming unions.

Workers at FedEx and FedEx Ground have been subjected to unfair treatment and a vigorous union-busting campaign. To keep workers disempowered and out of unions, Smith’s companies have treated them as independent contractors, rather than employees. Workers who try to form unions are intimidated and sometimes even terminated. American Rights at Work has released a comprehensive report on the hostile climate for workers and unions at FedEx.

Smith, currently a national co-chair for McCain’s campaign, has been listed as one of McCain’s “economic gurus.” Smith’s record shows he’d be unacceptable to working people—and McCain’s admiration for Smith is yet another sign that he’s out of touch with workers’ needs.

Smith unfortunately is a natural fit with McCain’s inner circle, which is stacked with lobbyists and corporate interests. Among his advisers:

That an anti-worker CEO like Fred Smith would rank high in a McCain administration is disappointing—but not surprising. Like Fred Smith, McCain has the wrong answers to the challenges facing working families.