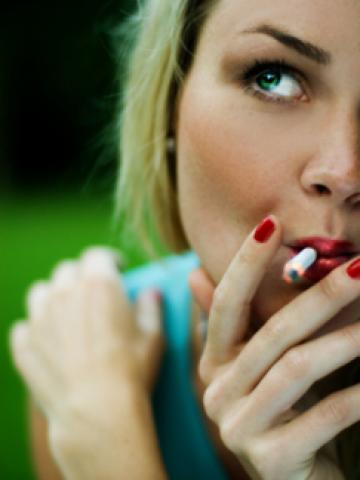 A new company is marketing electronic cigarettes as a healthier alternative to smoking and a way to quit; health professionals argue they may be addictive.

E-Cigarettes: Even Better Than the Real Thing?

New smoke-free, battery-operated “e-cigarettes” are allegedly healthier than real cigarettes, but there is a dearth of data about the safety of the new product, manufactured by a company in China. They are not approved by the FDA, and there is no evidence that they will help users quit smoking, as manufacturers claim. Electronic cigarettes contain no tobacco; they release a “vapor” of liquid nicotine into the lungs.

The cigarettes are sold online and in kiosks in malls. One infrequent smoker sampling the brand at a kiosk in Long Island, NY, told Newsday that e-cigarettes were “different” and he “could see smoking them regularly.”

Health officials told Newsday they had numerous concerns and reservations. The cigarettes come in flavors like chocolate and strawberry, raising concerns that minors will start smoking them. Maureen Crowley, director for preventive medicine for the Suffolk Health Department, said that, “anything that promotes or glamorizes smoking is a step backward.” Across the board, professionals said there was no reason to believe that the cigarettes would help anyone quit smoking, and some are concerned that e-cigarettes may themselves become addictive.

Senator Frank R. Lautenberg of New Jersey has written a letter to the FDA asking that they stop the sale of the cigarettes until further investigation is completed. In a press release, he emphasized that there is no information about the long-term effects of these cigarettes. The senator has a background in tobacco investigation; he urges the FDA in the letter, which is available on his Web site, to drop its plan to evaluate the product on a case-by-case basis and simply remove them from the market.

The Smoking Everywhere Web site advertises, “It Looks like a cigarette, Feels like a cigarette, Taste like a cigarette, But it is not a cigarette. It is just so much more…” Unfortunately, health officials have yet to determine exactly what it is. One of the main selling points of the cigarette is that because it is smoke-free, it can be smoked anywhere, including in places where smoking is officially banned.

The site also claims that because the cigarettes are tar and tobacco-free, they are healthier than real cigarettes. But as of yet, there is no scientific evidence supporting these assertions. The cigarettes are stated to be better for the environment and are ultimately less expensive than regular cigarettes.

In 2005, Gov. Tim Pawlenty of Minnesota proposed banning certain types of flavored cigarettes, believing that they were particularly appealing to minors. A year later, after a multi-state legal effort, major tobacco company R.J. Reynolds “agreed to stop using candy, fruit and alcohol names for flavored cigarettes that may appeal to children.” However, they did not agree to stop selling the cigarettes themselves.
Filed under: Health & Science
Share Tweet Pin G Plus Email
previous article: In Macedonia, Student Protest Ends in Violence
next article: The Stripping Of Karma