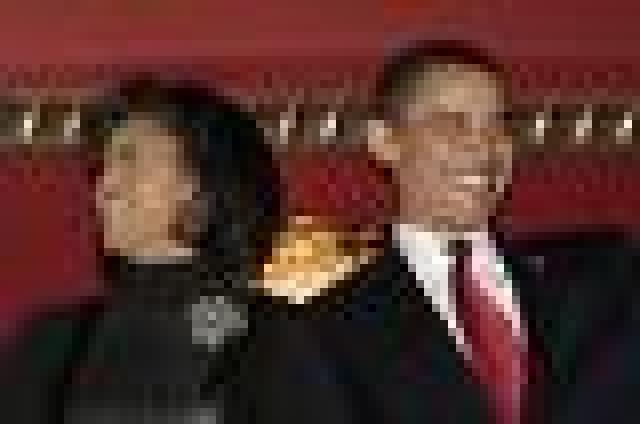 WASHINGTON (Reuters) – U.S. President Barack Obama arrived at his first White House news conference on Monday with a message to sell: government has the keys to fix the economy.

With that declaration, the president defended the most important piece of legislation to emerge from his young administration.

Pushing hard for passage of a stimulus package of more than $800 billion, Obama, a Democrat, fended off Republicans who have criticized the bill and he offered struggling Americans hope that Washington could solve their problems.

Wearing a red tie and an American flag pin, the president otherwise largely avoided breaking new ground on his economic proposals during an hourlong back-and-forth with reporters.

He deferred to the planned announcement on Tuesday by Treasury Secretary Timothy Geithner for details on how the administration would administer the remaining $350 billion of a rescue fund for the financial system.

On foreign policy, he signaled his expectation a new relationship with Iran could begin within months.

His responses were smooth but generally long, which limited the number of questions journalists could lob at him.

Mostly he hammered home his position that government — and, as an inherent result, his stimulus proposals — had the answers to lifting the United States out of recession.

"It is absolutely true that we can’t depend on government alone to create jobs or economic growth," he said.

"That is and must be the role of the private sector. But at this particular moment, with the private sector so weakened by this recession, the federal government is the only entity left with the resources to jolt our economy back into life."

He took issue with people who criticized President Franklin D. Roosevelt for his famous "New Deal" policies that were used to help lift the country out of the Great Depression.

"They’re fighting battles that I thought were resolved a pretty long time ago," Obama said.

He said he did not really want to spend billions of dollars of taxpayers’ money, but that was what was required.

"I would love not to have to spend money right now," he said. "That wasn’t how I envisioned my presidency beginning. But we have to adapt to existing circumstances."

Part of his sales pitch included an emphasis on job creation. The president has said repeatedly the package would save or create between 3 million and 4 million jobs. On Monday, he dropped that range and focused on the latter number.