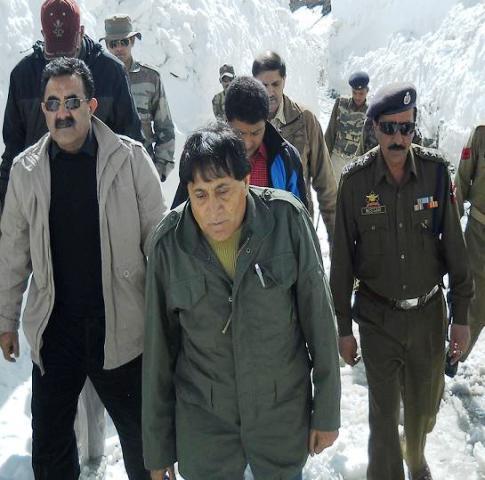 Srinagar, April 26 (Scoop News) – JK Minister for Transport and CA&PD,  Qamar Ali Akhoon visited Sonamarg and took stock of removing snow from Srinagar-Leh National Highway at Zero Point Zojila, 22 kms from Sonamarg. He was informed that five dozers, two Robellas and one JCB Machines have been pressed into service for snow clearance from the highway and the road has been cleared upto link.

On this occasion, he directed the concerned agencies including BEACON and its engineers to make every effort for restoring the traffic as the people of both the sides of Zojial are facing great problems on account of communication. He also asked them to remove landslides and widen the highway so that the traffic can be restored immediately on the sole link road between Leh-Srinagar so that the supply of essential commodities like ration, sugar and other things can be dispatched to the people who are cut off with the valley from last several months due to winter.

Meanwhile, the Minister at Sonamarg expressed satisfaction on the arrival of a large number of tourists enjoying the marvellous natural beauty of the snow covered valley of Sonamarg and hoped that this tourist season would provide source of income to a large chunk of people who are directly or indirectly connected with this trade, particularly tourist guides, tour and travel agencies, houseboats owners, hoteliers, taxi and shikara walas etc. He said that the tourism sector is one of the important pillar to strengthen the economic conditions of the state.

Akhoon also directed the traffic police and other concerned agencies to regulate the traffic and provide an alternate parking place to tourist vehicles so that the traffic on runs smoothly.

Later, a large number of people of surrounding areas of Sonamarg and a delegation of the pony walas of Dras met the Minister and putforth their demands. The Minister assured them that their demands would be looked into sympathetically and said that the present government is committed to mitigate the genuine difficulties and problems confronting people gradually and provide them.