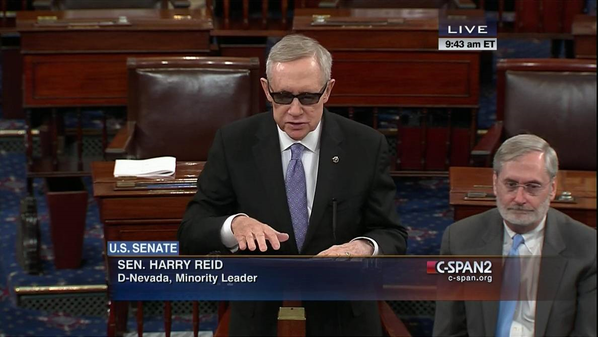 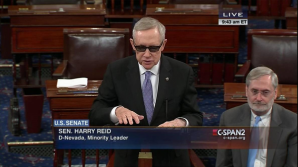 ” I would hope the Republicans would rethink what they have been up to–their reckless, cynical attempts to increase taxes on millions of middle-income families. That is what it amounts to”, said Senator Reid of Nevada.

On June 25, 2015 Senator Harry Reid of Nevada asked permission to address the United States Senate regarding the Affordable Care Act and Republican’s attempts to repeal or weaken the law, which was just upheld by the Supreme Court on June 25, 2015:

“Mr. President, today in this great country of ours the Affordable Care Act–ObamaCare–has survived the latest partisan attempt to deny health coverage to working families. Millions of working families won today. America won today. The Supreme Court ruled against Republicans who were seeking to strip 6.5 million Americans of the subsidies that enable them to buy health insurance coverage. America won, I repeat, very pure, very simple.

More than 10 million Americans are covered in the exchanges operating across the country, many of them insured for the first time, and 85 percent of these men and women receive tax credits that help them afford that coverage.

On top of that, 12 million more Americans now have coverage through the Medicaid and Children’s Health Insurance Programs. The Commonwealth Fund recently found that more than 8 in 10 adults–four-fifths–of people who have these programs are satisfied with them. The Affordable Care Act is not perfect. No law ever is. But this law is working for millions–approaching 20 million–Americans.

Once again, the Affordable Care Act prevailed. So I say to my Senate colleagues, respectfully–and I mean that–stop banging your heads against the wall. This legislation passed. It is the law of this Nation. Stop. Move on. Republicans should pause for a minute and look back.

I don’t know the number anymore. I don’t know, I lost count–is it 75? It is certainly approaching 100–of the actual votes which have taken place to repeal the law. Never even came close to passing, but they have done it time and time again. Stop it. Think of the time wasted doing it. As Einstein said, the pure definition of insanity is someone who keeps doing the same thing over and over again and gets the same results.

I would hope the Republicans would rethink what they have been up to–their reckless, cynical attempts to increase taxes on millions of middle-income families. That is what it amounts to.

I was interested in looking at the paper today regarding what Republicans have suggested doing if the Supreme Court ruled against this law. Every one of them, without exception, would be a tremendous blow to the budgeting process of America. This bill makes America money. It has cut the deficit significantly. That is why I say it makes the country money. It allows for a more healthy nation.

So I think the public has basically had it with Republicans trying to take away a law that protects them from insurance company discrimination when they get sick or hurt. Enough is enough.

I had a “Welcome to Washington.” I have them every Thursday. I had a group of people here from Nevada who have family members who suffer from cystic fibrosis. They were able to tell me that for the first time in the lives of their children they could not be denied insurance. They are adults now. They can’t be denied insurance coverage because of this law. If this had been repealed, people with cystic fibrosis and many other diseases would not be able to get health insurance. So let’s move on. Stop this. Stop wasting the time of the American people by trying to repeal the law.

I appreciate the work done by the Supreme Court, a 6-to-3 decision. It was a good decision, a strong decision that upheld the law. Enough is enough. Let’s move on.”

See video: The President Speaks on the Supreme Court’s Ruling on the Affordable Care Act  https://www.youtube.com/watch?v=heWEWlY-z6A