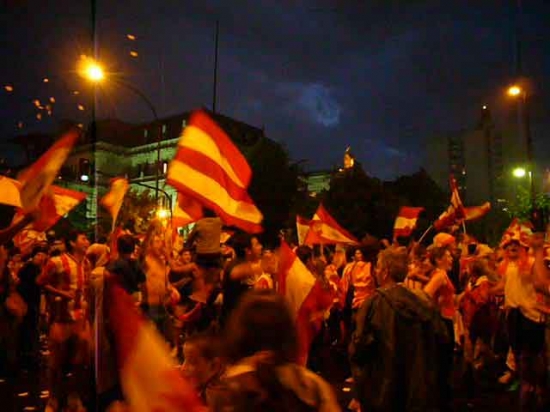 La Plata, Argentina — It is difficult to overstate the importance of soccer in Argentina.

In Castellano, the dialect of Spainish specific to the River Platte and greater Buenos Aires province, you are not a supporter of your favorite soccer team, you are from that team.

“I have been from Estudiantes before I was a person,” says Hugo Ruano, a journalist at University Radio.

“Before I received my birth certificate,” he says, “my father signed me up and I received my card as a member of the Society of Estudiantes.”

Ruano continues, “My birth was difficult and my mother had to have an anesthesia.  When she woke up finally, realizing I was safe, the first quesiton she asked was, ‘What happened with the game?'”

“On that day,” says Ruano, “May 16, 1968, Estudiantes were in the championship of the Copa Libertadores.”

Graciella Crivos, a Gimnasia supporter, says, “I hate futbol.  But, my father is from Gimnasia, so I support them.”

“If they lose,” she says, “I feel bad because I know that he (her father) will be depressed.”

Some supporters choose to have their weddings within the stadiums where their favorite teams play, bury their favorite pets there or even request that their ashes be spread over the pitch.

Not surprisingly, rivalries between teams and fans are fierce, spanning generations.

“They are beasts, the worst of the worst.”

Crivos remarks that, “Estudiantes fans are famous.  If they win, they love their team.  But if they lose, they go somewhere else.  They have no loyalty.”

Julio Drut, a retired carpenter, did the unthinkable.  He changed sides.

One day, as he was at the game, rooting for Estudiantes, a fellow supporter urinated on him.  “From that day,” he says, “I am from Ginmasia.”

Ruano says, “The perfect Sunday is when Estudiantes win and Gimnasia lose.”

Gathering with drums and flags in Plaza San Martin to celebrate the defeat of a rival is a La Plata futbol custom almost as important as celebrating a win.

As of October 2006, Estadium Unico, the project approved in 1993 by President Eduardo Duhalde to house both of La Plata’s professional soccer teams under one roof, has been realized.  Sort of.

How it all came to pass is still something of a mystery, and how long the agreement between Estudiantes and Gimnasia to share Unico will last remains unknown.

From the outset, the project has been plagued by million-dollar cost over runs, mismangement and nosiy political infighting, not to mention fallout from the bitter rivalry between Estudiantes and Gimnasia.

Ruano says, “I do not think we will every really now how this stadium actually came to be built.”

“Logically,” he says, “yes, La Plata is a small city, we need to conserve space.  The single stadium is a good idea.”

Christian Angeletti, a physical trainer for Gimnasia’s youth team, says “I like the new stadium, the facilities are good.  If we have to share with Estudiantes, I have no problem.”

But only until both teams stadiums were closed by the city in 2006, because of rickety wooden bleachers and inadequate security arrangements for visitors, and Estudiantes was finally allowed to refurbish its stadium, did they agree to share the same field.

Despite the considerable taxpayer dollars invested, Estadium Unico is not yet complete.  A whole section of unusuable, white concrete seating glares from the television screen like a capped tooth.

In addition, the parts for a modern, retractable roof still languish in a Buenos Aires customs wharehouse and are so neglected, they may have to be replaced.

“I am just happy we finally have our stadium,” says Peter.  “Until then, we could play at Unico, Quilmes, Boca, I don’t care.”

On Nov. 14, the AFA (Argentine Football Association) banned all visiting fans from attending away games.

No one is saying for sure, but many point to the Barra Bravas, Argentina’s version of Hooligans, as being responsible for this year’s spiking levels of violence and cancelled matches.

Ruano says, “Good people, clean people are afraid to talk about it (the Barra Bravas) because they could be in danger.”

Angeletti says, “The presidents of the clubs need the Barra Bravas to get elected (by the club).”

“As a reward,” he says, “they get some money.  But by the time they (the club presidents) don’t need them anymore, the Barras already have too much power.  And then you have problems.”

During the halftime of a September 10th match between Gimnasia and Boca Juniors, Gimnasia president Juan Jose Munoz approached head referee Daniel Gimenez in his locker room and gave him a piece of his mind.

Just what words were exchanged is unknown, but according to press reports, Gimenez claims he was threatened and cancelled the match as Gimnasia was up 1-0.   Munoz was later suspended for six months.

On Nov. 8, the second-half of the cancelled match was played and Boca scored four goals against a hapless Gimnasia.

Gimnasia defender Ariel Franco gave, on Nov. 10, statements to the newspaper Ole and on the local radio show La Red, to the effect that “the Barra brava” came to their practice Tuesday night and made threats.

“Something happened,” he said on the radio, “but I can’t go into details.”

The matter has been taken up with the Ministry of Justice.

Franco is not alone is speaking to the press about the strangeness of Wednesday’s play.

Gimnasia trainer Pedro Troglio, according to Pagina 12, said “something was wrong with the muchachos,” but also declined to comment further.

Franco said, “I did not think as a player I would have to live like this.”

During the first week of the Apertura, a game between Godoy Cruz and Arsenal at Mendoza was stopped short 17-minutes into play as tear gas spread over fans clashing with riot police.

According to an Oct. 3 article by Reuters, Godoy’s Barra Bravas were furious with the team for not providing them with transportation to the game, free tickets to the match and donations from players’ salaries.

On Oct. 10, after River Platte lost 3-2 to Racing Club, its Barra Bravas were suspected of involvement in players’ cars being vandalized.

“Sadly,” he said, according to Reuters, “when you’re involved in this type of activity the threats become a habitual companion.”

On Oct. 20, Buenos Aires security minister, Leon Arslanian, suspended a game between Racing Club and Boca Juniors, after a court said riotous fans might enter Racing’s Stadium, despite a ban on Barra Bravas.

The leaders of Boca Junior’s infamous group of fans, La 12, have been convicted for crimes related to skirmishes with rival fans in 1999 and 2003.