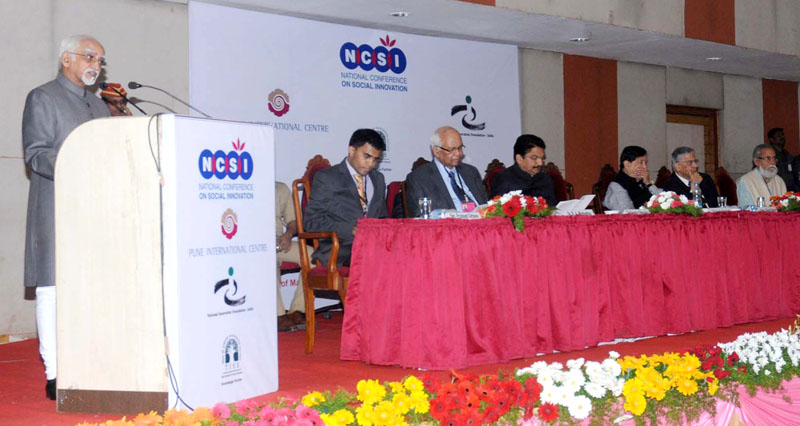 The Vice President, Mr. Mohd. Hamid Ansari addressing the inaugural session of the 3rd National Seminar on Social Innovation, in Pune on November 17, 2015. The Governor of Maharashtra, Mr. C. Vidyasagar Rao, the Guardian Minister for Pune, Maharashtra, Mr. Girish Bapat, the President of PIC, Dr. R.A. Mashelkar and other dignitaries are also seen.

Pune (PIB-GR-TYP-BIN): The Vice President of India, Mr. Mohd. Hamid Ansari said that Social Innovation is not possible without Social Harmony. He was addressing the inaugural session of 3rd National Seminar on Social Innovation in Pune on November 17, organized by the Pune International Centre (PIC) which was attended by the Governor of Maharashtra, Mr. C. Vidyasagar Rao, Guardian Minister for Pune, Government of Maharashtra, Mr. Girish Bapat, President of PIC, Dr. R.A. Mashelkar and other dignitaries.

Defining Social Innovation as “new solutions to social challenges that have the intent and effect of equality, justice and empowerment”, the Vice President said that while economic progress is essential for survival and well being, it is neither a substitute nor the panacea for the social challenges that confront us. Every society, including ours, requires its constituent parts to work in harmony, he added.

The Vice President said that it was necessary to delineate the societal backdrop essential for optimal creativity in a society seeking to maximize its innovative genius and also to make sure that a social consensus around equality, justice and empowerment exists, more so because there is reason today for concern about this consensus and about the emergence of a propensity for intolerance of diversity and dissent.

The Vice President expressed concern that despite India’s long tradition of innovation and a string of recent innovations, India was lagging behind its peers on the Global Innovation Index. The Vice President referred to various schemes and programmes that the Government of India had activated to encourage innovation in India and stressed the importance of re-orienting our education system for providing an environment that nurtured innovation.