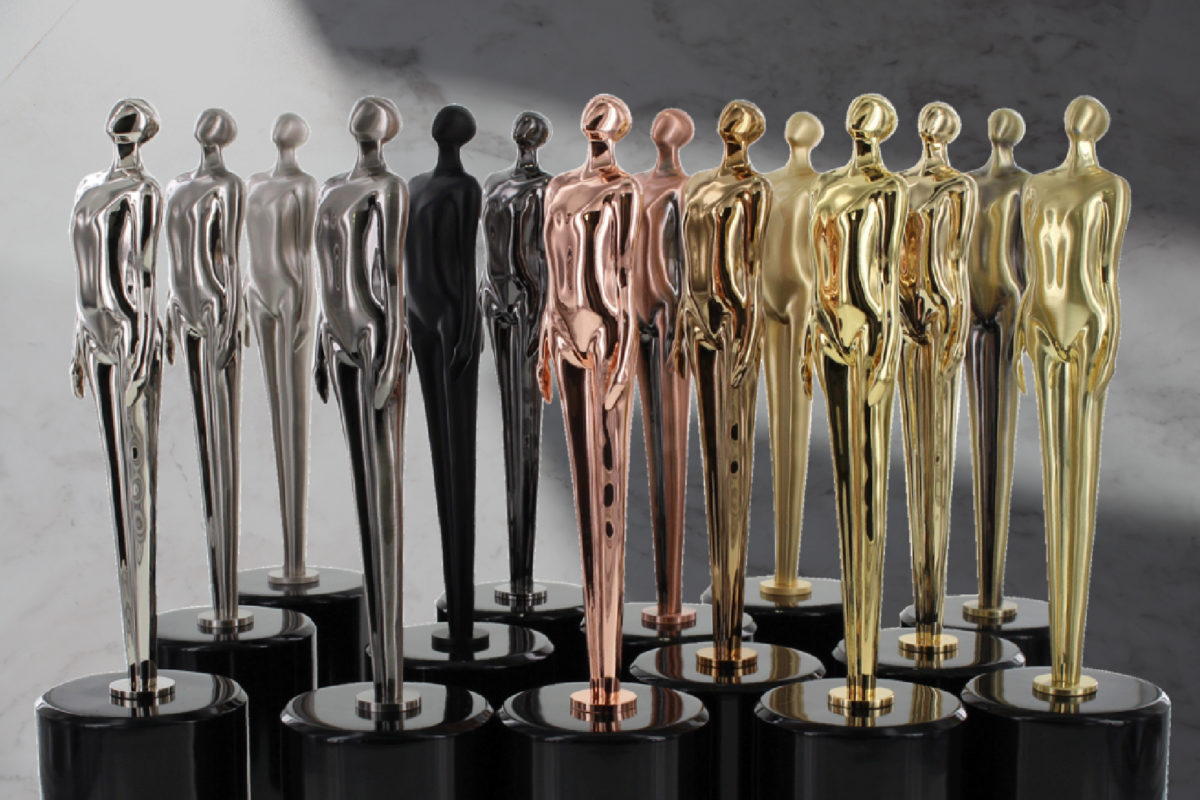 The name Society Awards has become synonymous with luxury designs and high-end awards for the most prominent names, brands, and organizations in the entertainment and corporate world. The high-end quality of each creation is due to endless hours of focused hard work from some of the most talented designers in the industry.  While the Society Awards team must design their statues in close collaboration with the client’s wishes, the company is known for creating pieces that are just a bit outside the scope of their client’s original ask.

Yet when the finished product arrives, it is so ideally suited for the predetermined event,but with a streak of luxury and refinement that the client could have never dreamed of in the beginning. At the level Society Awards exists today, it cannot afford to create anything short of perfection, and from the looks of it, they don’t intend to fall short anytime soon.

Under the stewardship of CEO David Moritz, Society Awards has been listed in Inc. Magazine’s prestigious 5000 as one of America’s fastest growing companies. Not once. Not twice, but an impressive and unmatched five times. Compound this with the dozens of design and marketing awards bestowed upon the Society Awards family in the first several years of life, and you very quickly begin to piece together a mural of their incredibly quick success.

As with most outstanding businesses, founder David Moritz saw an open space in the high-end,luxury awards market and swiftly sought to fill it. Moritz envisioned an award design and a business model so luxurious, so unlike anything that was on the market at the time and he quickly took the steps needed to manifest that vision into reality.

In only a few short years, Society Awards was firmly perched at the helm of the industry and the team quickly became responsible for the design and production of most all luxury entertainment award-trophies worldwide. Society Awards remains the only company designing at that level of luxury and continues to offer a level of service unmatched by any other in the industry.

A New York University graduate in British and American Literature and a JD from Cardozo School of Law, Mortiz has successfully turned his passion for beautiful objects and all things luxury into a thriving business. Society Awards, created in 2007, grows by an astounding 50% every year.

While he was still attending NYU, Moritz found himself designing custom suits and elaborate Halloween costumes for his classmates for important events while still working furiously to obtain his law degree. Moritz was weighed down by the duality of these two inconceivably opposite worlds, yet did not see a way to tie the courtroom and his design workshop together into one.

At the very same time, Moritz opened a bar in Manhattan that he called Society Bar. I don’t think that he recalls the moment that all of his worlds congealed and Society Awards first got legs, but Moritz knew that day when he settled on a business that would deal in luxury awards that he had found where he had been headed all along. From a bar, a courtroom, and a luxury design studio, Society Awards was forged.  Moritz had been searching for a niche industry where he could make a significant impact, and that was precisely what he had found.

More Ventures from the Awards Man

On an entrepreneurial quest to infuse all things with a new level of luxury, David Moritz work was just getting started with the creation of Society Awards. Soon enough, he founded Viceroy Creative, a full-service marketing firm that specialized in brand strategy, innovation, and package design.

Viceroy Creative quickly ascended the ladder of the marketing industry and soon was boasting a list of clients that most marketing companies would only dream of amassing and he did not stop there. This time, he saw the parallels between his first two businesses and decided to round them off with a third venture: Ambition Beverages.

Only adding to Moritz’s underlying entrepreneurial theme of pure unadulterated luxury, Ambition Beverages carried a line of champagne, vodka, and sparkling wine from its inception.  Vision vodka is a favorite with upscale restaurants, bars, and nightclubs in New York City. His luxury French champagne, Noblesse Champagne is among the finest in the world today.

The Quirky Side of Entrepreneurship

David Moritz has cultivated his set of unique, quirky habits throughout his years developing multiple businesses.  First, he has two breakfasts and two dinners every single day. And get this; Moritz squeezes in time to do most of his meal prep himself. He’s a chef! Also being a health and fitness buff, pairing his gym workouts and personally handling his meal prep ensures he eats a well-balanced meal and no time is wasted choosing snacks.

Another quirky habit borne from this natural entrepreneur, which has worked out well for Moritz is his use of technology to keep track of his schedule and to do list,as well as all extracurricular note-taking. Moritz does not rely on memory for anything. According to him, note-taking forms the basis of successful projects.

A fundamental lesson Moritz had to learn through trial and error throughout his career was how to focus on only a small handful of projects at one time. This narrowed focus allows you to finish projects in an expedited manner, giving those few projects your undivided attention rather than trying to pull off dozens of projects at the same time, where you will inevitably spread yourself too thin to execute any one of them flawlessly. Moritz admits in his early years to exhausting his energy supply and continuously having an overflowing plate of projects at everymoment.   As every smart entrepreneur would do, Moritz learned to pace himself, focus his creativity on the most critical projects on his plate and make sure each comes to a successful conclusion.

Moritz has seen it all when it comes to the world of luxury entertainment awards. One of the most luxurious award-trophies ever created by the Society Awards team was for the Academy of Country Music’s 50th Anniversary.  Designed in collaboration with David Yurman, the trophy was crafted out of more than one thousand grams of sterling silver and 4 carats of black diamonds; it also included a black onyx stone. Yurman’s signature pattern was incorporated into the silhouette of the ACM statuette making it one of the most valuable creations that Society Awards has ever created.

Whether you know it or not, everyone has been introduced to more than one of Moritz’s creations.Society Awards is hired to design and build awards for internationally televised award shows that have become an intricate part of our existence. The following are some clients the company works with:

Society Awards can still be considered a relatively young company, but when you scroll through their list of clients, it is easy to see that youth has not stopped Moritz and his team from becoming the premier heavyweight in the design award space. Moritz’s entrepreneurial spirit does not seem to quit and only seems to grow stronger in the face of each challenge that he is presented. One thing is sure about the future for Society Awards; it will be grand, sophisticated, opulent and luxurious enough to knock out socks off every single time.

Society Awards Pledges to Maintain its Commitment to Quality Craftsmanship

Finding quality craftsmen isn’t as easy as it used to be. Fortunately, Society Awards holds on to its decade-long commitment to doing exceptional work. They promise to continue living up to this promise in the years to come.

Filed under: Big Business
Share Tweet Pin G Plus Email
previous article: Pros And Cons Of Using A Free VPN
next article: How to Make an Air Hockey Table (It is Easier Than You Think)