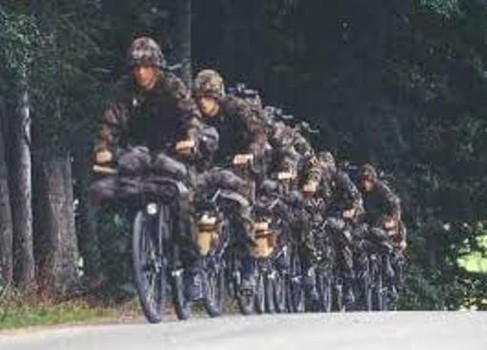 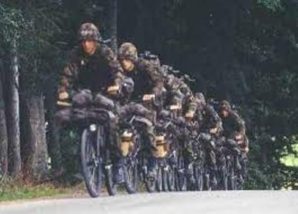 “I don’t care what anybody says, the bicycle is the quickest and cheapest way to move light infantry”, said one soldier at Ft. Riley, Kansas who wished not to be identified.

“The U.S. Army would do well to make them available to its special operations troops and infantry units”, he said.

The soldier should know he is an expert in both military history and mountain bikes. “I’ve ridden one most of my adult life. They have practical applications for the military, especially for moving troops around…”, he explained.

“They problem is the Pentagon isn’t really interested inbicycles, which is sees as low tech, not high tech.” he said.

Recently this particular soldier put on his fatigues, helmet and a backpack of 120 pounds and rode a man’s mountain bike he purchased at Walmart for $88.00 from Ogden to Hays a distance of 166 miles in 9 hours 11 minutes…

The bike used in the preformance test was identified as a NEXT Power X Men’s 26 inch, 18-speed with Shimano grip shifter with dual suspension and alloy wheels. “I rode it through grass, mud, up dirt hills, down dirt hills, over curbs, rock roads, wooded trails”, he said.

The soldier explained this was both an endurance and preformance test, not authorized by the U.S. Army which otherwise rejects the idea of bicycles.

“It still is a very fast way to move around. Bicycles are also quite, at night you can’t hear us approaching . A soldier can traverse mountain terrain otherwise impassable using motorized vehicles. It would be great in mountain warfare”, the soldier said.

Today bicycles are not used by the U.S. military, with the possible exception of certain Military police units, who already recognize their value as a tool for protecting neighborhoods and fighting crime (see article: Bikes help Military Police keep neighborhoods safe http://www.army.mil/article/82435/Bikes_help_Military_Police_keep_neighborhoods___/ ).