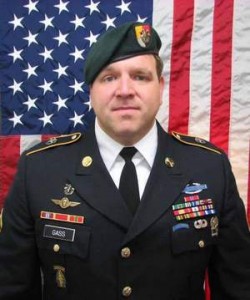 Pictured here: Staff Sgt. Girard D. Gass Jr., of Lumber Bridge, North Carolina who died of non combat related activities. He was a member of the 3rd Special forces whose motto is:
“From the Rest Comes the Best”
“We Do Bad Things to Bad People”

The Pentagon today announced the death of a soldier who was supporting Operation Enduring Freedom.

“Operation Enduring Freedom” (OEF) is the official name used by the U.S. government for the War in Afghanistan, together with a number of smaller military actions, under the umbrella of the Global “War on Terror” (GWOT).

The release read simply as follows:

Note: Nangarhar (Pashto: ننګرهار‎ and Persian: ننگرهار‎ ; Nangarhār) is one of the 34 provinces of Afghanistan in the east of the country. This is the province where Osama bin Laden had strong position and was leading fighting against US and other coalition, in the 2001 Tora Bora campaign. As such it is a hotbed of insurgent activity and drug running and illegal weapons activities .

Filed under: Military, News
Share Tweet Pin G Plus Email
previous article: 5 Common Skin Conditions and How to Care for Them
next article: Ukrainian soldiers flee to Russia rather than fight against their own people