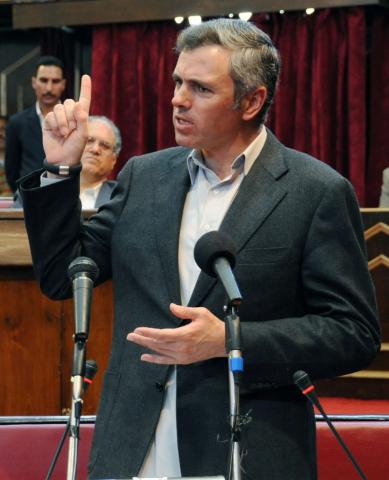 Jammu, March 5 (Scoop News) -Underscoring the need for working out amicable solution to political issues of Jammu and Kashmir in accordance with the aspirations of people of Jammu, Kashmir, Leh and Kargil to the larger extent, Chief Minister, Omar Abdullah Tuesday said that the task is tough but not impossible.

“To move forward with the notion of a solution having approval of each and every citizen is just to live in a make belief world”, he said adding that a solution with maximum support of people of all the regions of the State has to be found. “We have to strive for it”, he emphasized and expressed the hope that the Union Government would address both domestic and international aspects of political issues of and move close to some befitting solution.

“The has been reflected in Shimla Agreement and there is need to engage in a dialogue process”, he said and reiterated his stand that political issues of are of political nature and cannot be resolved either by money power or by the gun. “We have seen neither gun nor money is answer to this issue”, he said and maintained that his government would help as catalyst and facilitator in the process of finding out a workable solution in accordance with the aspirations of people of all the regions of the State.

Replying the debate on the motion of thanks to Governor for delivering speech to the members of both the Houses, the Chief Minister told Legislative Council that Jawaharlal Nehru and Late Sheikh Mohammad Abdullah like great leaders, in the past, focused on resolving this issue. “We should not lose heart. We should continue our efforts till we come close to some amicable and befitting political solution”, he added.

Stating that peace is essentially important for resolving all issues and putting the State on road to progress and prosperity, Omar Abdullah said that during the last two years peace has greatly rooted and the year 2012 can be safely rated as the most peaceful year in last over 20 years. “Besides the visit of over 12 to 13 lakh visitors to the Valley, the development process received big fillip during 2012”, he said and reiterated that his government flags tourism as an economic activity and not a Barometer to gauge the normality. He said the visit of huge number of tourists to the Valley, successful panchayat elections and conduct of peaceful Amarnath yatra do not mean that no political issue is left unresolved now. “If we think otherwise, we are mistaken”, he said.

The Chief Minister said the State got highest ever plan this year and the challenge before the government is how to make expenditure to yield maximum results for public good. “The second challenge before the State is how to stand on its own legs so far as economic aspect is concerned”, he said elaborating that during the coming years would be getting enhanced plan year after year. “We have focused on effective governance, transparency in functioning, third party monitoring, e-governance and other measures aimed at improving and upgrading delivery and making transparency rule the roost”, he said adding that his government has initiated two more initiatives of Result Framework Document (RFD) and monitoring of projects utilizing mobile photo despatch mechanism.

Omar Abdullah said under RFD the performance of the departments would not be judged on the financial expenditures made by each department during the year but on the basis of physical targets achieved by it and the actual benefits accrued to the people out of these. He said every department has to fix the physical targets as per the budgetary provisions and by the end of year its performance would be judged on the achievements realized on this count. He said that by the mobile photo despatch mechanism, the monitoring officers can get the photo details of the status of progress on different works from all across the State.

On law and order situation, the Chief Minister said that 2011 and 2012 have been relatively peaceful years and the graph of militancy has come down by 37 per cent. Lauding J&K Police and CRPF for working in difficult situation in the State, the Chief Minister said that police force has to attend two different situations of law and order and militancy simultaneously in . He saluted the courage of police force for tackling both the situations at the cost of their precious lives and safeguarding the lives of common people.

On AFSPA, Omar Abdullah said that he will continue to advocate its gradual removal from the areas where there is no need for it and that of Army. “I have not put this issue on back burner. It is alive and we are continuously engaged with the Central Government on this issue”, he said adding that a woman from North-East area is on hunger strike for last 12 years demanding revocation of AFSPA.

On Model Police Act, Omar Abdullah said that the Supreme Court of India has directed for implementing Model Police Act in the States to make the existing Acts more people-friendly and transparent. He said there was also need to have a reformed Police Act in force in the State, as such, a Draft Act was formulated. “Government is not tabling this Act in the Legislative Houses at present. It has been put on website for public comments. When these comments come in, these would be reviewed and reflected in the Act. The Act will be then reviewed by the Police and Law Departments. It will be placed before the Cabinet and after that the Bill will be drafted to be placed before the Legislative Houses and after getting clearance from the both the Houses it will go for Governor’s assent”, he said adding that creating false propaganda and rumours about this Act holds no ground.

On aftermath of Afzal Guru’s hanging, the Chief Minister said that he had no other option but to impose restrictions in the Valley to safeguard the lives of people. “Imposition of curfew was my compulsion to control the situation and safeguard the lives of people, otherwise who would like to create difficulties for people”, he said and appreciated the people for extending him support to control the situation and help safeguard precious human lives. He also appreciated the role of security forces in this regard.

On Panchayats, Omar Abdullah said that his government is actively working with the Central Government for providing honorarium and group insurance to the panchayat members adding that the strengthening of security grid, police patrol, identification of vulnerable belts and area domination is being done to ensure safety of panches and sarpanches. He said that powers from 14 departments have already been transferred to panchayats. “The panchayat members have to work together in formulating plans in Deh Majlises, they have to oversee functioning of ration depots, check the attendance of school teachers and many more similar services transferred to them”, he said adding that panchayat as a grass root level democratic institution has to deliver on various counts besides focusing on fund spending.

The Chief Minister announced Amnesty Scheme for domestic power consumers and said that an Invest Weaver Scheme will be available to the consumers to take benefit and get relieved from the burden of paying interest on outstanding electric bills.

On return of Kashmir Migrants, Omar Abdullah said that his government would take all measures to restore the sense of security in them so that they would voluntarily return to their native place. Describing them inseparable part of , he said that due to lack of safety and sense of security, the Kashmir Migrants left their homes and restoration of this sense would motivate them to return back. However, he suggested that they should take a step forward in this direction and government would move ten steps towards them.

The Chief Minister also referred to the problems of PAK, PoK, 1965 and 1971 Jammu Refugees and said that the nature of issues confronting these categories of refugees are different requiring different methodology to address them. He said that government is alive to their problems and are being tackled separately and in the relevant legal framework.

The Chief Minister conveyed his thanks to the Governor for delivering address to both the Houses of Legislature at the beginning of the session.