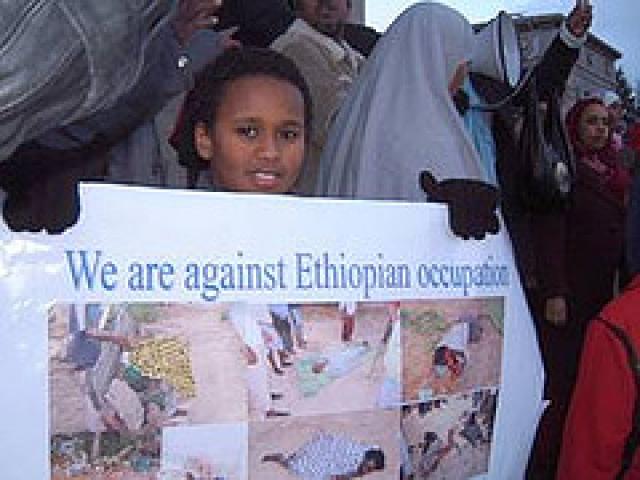 Somalia’s militant Al-shabaab warned Ethiopian troops on Sunday that they would break the necks of their soldiers if they remain inside Somalia. This came after several hundred Ethiopian soldiers crossed into the war- country.

"Soldiers of our enemy, the black colonialists of Ethiopia, made some movements into our region on Saturday, but they do not scare us," said Sheikh Yusuf Ali Ugas, the insurgent group’s commander for the Hiiraan region.
"We will break the necks of the invaders. … Our troops are ready for anything, if the Ethiopian enemy tries to attack us," Ugas added, speaking on Shabaab’s radio Al Andalus.
According to local people, Ethiopian troops in lorries and armored vehicles entered southern and central Somali regions, Saturday, although spokesman for the Ethiopian government has denied all that information.
"We shall defeat them and fight them any way we can," Ugas said. "The Ethiopian attack is a plan to oppose the implementation of Sharia law in Somalia by the enemies of our Muslim nation."
Some witnesses report that Ethiopian military convoys have entered the south of Somalia after crossing through Kenya, which Ethiopia shares borders with both nations.
Local residents said they have seen scores of trucks full of Ethiopian soldiers entering the town of Bulo Hawa at the border of Kenya.
Separately Al-shabaab rebelswelcomed the presence of Ethiopian troops in Somalia which indicate at least to them, that Kenya was losing the war against the Somali rebels.
"We are glad to say Ethiopian troops are in the Guriel area. They have come because AMISOM and Kenya have failed in the fight against al Shabaab," Sheikh Abdiasis Abu Musab, an al Shabaab spokesman, told Reuters.
The last time Ethiopia troops invaded Somalia was in December 2006 with U. S. blessing and left in 2009 after they have crashed another kind of Islamist group.
Filed under: Politics, World
Share Tweet Pin G Plus Email
previous article: Ecotech Institute’s Wind Energy Technology Program Adds New Simulators and More to Labs
next article: Arroyo 2007 election fraud charge recalls 2009 Ampatuan massacre