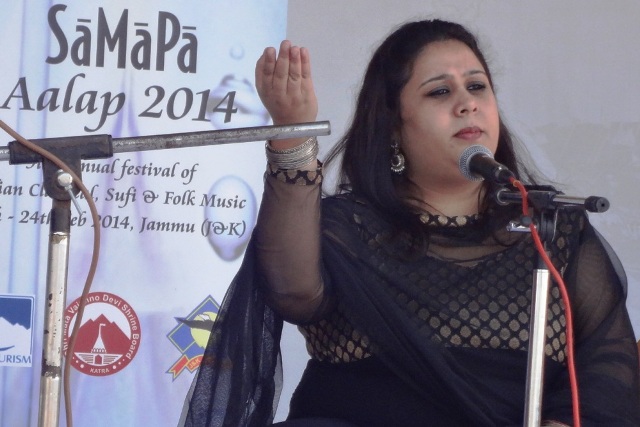 Jammu, February 13, (Scoop News)-SaMaPa Aalap Festival (SAF) 2014 featured the daughter of the soil and the young Sufi songstress of the country Ragini Rainu on Day 4 of the fortnight long Ninth Annual classical, sufi and folk music extravaganza. SAF 2014 is presented by SaMaPa (Sopori Academy of Music And Performing Arts) in collaboration with Shri Mata Vaishno Devi Shrine Board, Jammu & Kashmir Police and Department of Tourism, Jammu.

The concert held at G.D. Goenka Public School was attended by hundreds of student and the staff of the institute including a number of music connoisseurs. The programme began with the traditional lighting of the lamp by the Director Mrs. Sanya Bansal, Principal Mrs. Jyoti Asija, Vice Principal Dr. Subrato Kundu, music maestro Abhay Rustum Sopori, Ms. Ragini Rainu and the other dignitaries present there.

Ragin, a disciple of the great music legend Pandit Bhajan Sopori, is known for her presentations which has a strong base of classical gayaki embedded with fluency, aesthetics and expressions. She presented various Sufi Qualams composed by her Guru Pt. Bhajan Sopori commencing her performance with Hazrat Shah Hussain’s “Maini Main Kinnu Akkhan” which means ‘O Mother, whom shall I tell about the pains that I am going through’ followed by Sattal Sarmast’s “Yaar De Gadolli” and Baba Bulle Shah’s “Ooth Challe”. She concluded her mesmerizing performance with ‘Dama Dum Mast Kalandar’ on the request of the students and staff. Singing raw and robust, her exuberance and her inimitable voice brought to life the ecstatic expression of Sufism, each rendition drowning the audience in the richness of this tradition and sending it into raptures. She also made the students sing with her various compositions creating a deep interaction and interest in the young children. She was ably accompanied by Subhash Kanti Das on Tabla, Damodar Lal Ghose on Harmonium, Chanchal Singh on Dholak and Jagmeet Singh on Guitar. Earlier Ragini introduced the concept of Sufism as a musical thought and a philosophy to the young students of Goenka. She said that Sufism is the soulful link between the man and the God. Principal Mrs. Asija proposed the vote of thanks. She said that it was a moment of high spiritual elevation wherein the staff and students were actually connected with the God Almighty. Very few Artists have the inborn strength and the quality to string man to God. She said that Goenkans would love to have many more such performances by artists of international and national fame and thanked maestro Sopori and SaMaPa for this presentation.

SAF 2014 on 14th February will feature Sitar recital by Zunain Halim Khan and Classical Vocal by Nitin Sharma at Ved Mandir Balika Niketan, Amphalla at 11:00 am and later at 4:00 pm at Ammucare (Mohanji Ka Aangan) for underprivileged children.

In his first reaction over the Budget presented in State Assembly today, Prof. Chaman Lal Gupta described the Budget figures as misleading, illusory and do not reflect the factual poor fiscal of the state.

Commenting upon the Budget speech of the Finance Minister, A. R. Rather, Prof. Gupta said an effort has been made to present a rosy picture keeping in view the coming elections and the Budget being last one of this Government.

He said that much of the spending of the State depends upon the grants and other receipts from the Centre, and this dependence is mounting even after receiving thousands of crores from the Centre. This sad situation has obviously arisen but for faulty planning, squandering of funds collected from poor Indian exchequer, Prof. Gupta regretted that the State has failed to generate its own resources even to meet the expenditure on the salaries and pensions of the State Staff.

Moreover, the only major sources of State own revenue still remains the Sales Tax followed by Excise.

He deplored the collection of revenue from the Sales of liquor and that too, from Jammu areas still continue to gallop.

Prof. Gupta assailed the Budget proposals for paying little attention to mitigate the problems of several sections of the society including the workers and labourers, ex-serviceman, highly educated youths, refugees, migrants and others.

The coming to a halt the developmental activities because of paucity of funds also exposes the claims of improvement of State finances.
MORE AT http://scoopnews.in/det.aspx?q=35731