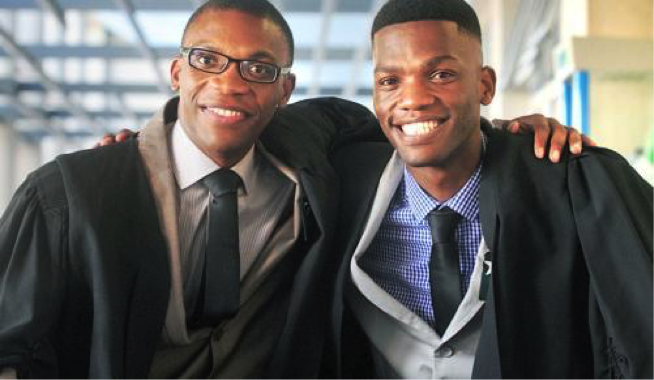 Khayelitsha, a township in the Western Cape Province of South Africa delivered two twin brothers to the world that have faced many challenges and that makes us think about the privilege to be able to further our education and pursue that dream career we have always wanted. Wandile and Wanele Ganya grew up in Khayelitsha, a small township area in Cape Town, South Africa. The two brothers grew up facing great financial strain and still obtained their Medical Degree in 2015. Their mother, Sylvia worked as a domestic worker and was the sole breadwinner. It can be said that she had enough to keep the pot boiling and expensive schooling was out of the question.

Wandile and Wanele studied hard and regardless of challenges that they had to face with difficult circumstances they prevailed. During their final year at The Center of Science and Technology in Khayelitsha just as they were on their way to graduation Wanele found out that he had contracted Tuberculosis. This would be a tragedy to anyone else but not the twins. Wandile made sure his brother stayed up to date with his school work and helped him while being treated for his condition. Strangely enough this final challenge they had to face did not have any effect on their future decisions. In fact it motivated both of them to pursue a career as Medical Doctors.

Regardless of his condition which was treated and cured effectively Wanele graduated and Wandile gained the prestige of being one of the Western Cape’s top students for 2009. They both gained financial subsidies from the University of Stellenbosch in the Western Cape and successfully completed their studies and graduated with a BA in Medicine and a BA in Surgery. When asked what pushed them to study and show their full potential they simply shrugged and said that there were many people in the township that rose above their circumstances and hard upbringing. This made them realize that learning and education was more important than hanging out on the streets. The irony was that the twins graduated alongside two other pairs of twins who also completed their medical degrees. Both brothers have already got their internships set up and are going to work together.

We look upon the less fortunate with a weary stare. We feel sorry for them and think that they will never have the opportunities we do. This is a serious misconception as the less fortunate make things work for themselves, they have the passion and the willpower to make a success of their lives and they motivate each other to get out of whichever slum they are in. There is an old saying that sometimes everyone should eat a little humble pie to understand how fortunate they are and it holds truth. If everything is just given to you will you appreciate it as much as if you worked for it? With online studies we are able to further out education to such an extent that it isn’t costly at all and that we don’t have to attend classes. If for example you are working in a medical field you can now complete your ACLS certification which will allow you to practice advanced cardiac life support. There are many advanced and specialized courses available online. Studying had never been so convenient and with these twins showing us how it is done does anyone really have an excuse not to better their circumstances and draw the map to their own future? Obviously these brothers lived by the saying “If life throws you lemons make lemonade.”